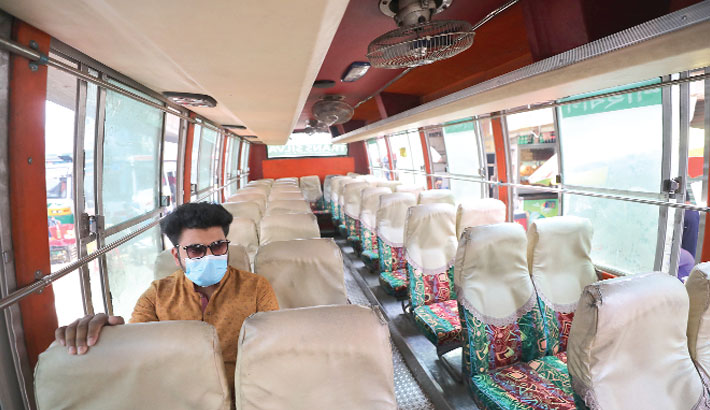 An almost empty bus runs on a street in the capital as people are avoiding public transport due to spread of coronavirus. The photo was taken from Sayedabad area on Sunday. — Reaz Ahmed Sumon

Dhaka wore the most deserted look on Sunday, the first working day of the week, compared to the past few days as many residents left the city due the cornonavirus scare and government’s awareness drive making an impact on those who live in this crowded capital city.

Traffic was very thin on most of the streets, lanes and by-lanes with only a few vehicles including buses, human-haulers and CNG-run auto-rickshaws along with motorbikes were seen with a very small number of passengers.

Being panicked by the coronavirus outbreak, many people, mostly students of different schools, colleges and universities, have either left or are leaving the capital to join their families in different parts of the country.

Besides fear, many Dhaka residents said they were also following government instructions to stay indoors as much as possible.

After the country's first coronavirus death on Wednesday, panic gripped the capital as well as other parts of the country.

Amid growing concern over the novel coronavirus infection, a large number of people, mostly students, small traders and other private companies started leaving Dhaka for the last few days after the government ordered shut all the educational institutions from March 17 to 31.

The stream of the home-goers from the capital continued on Sunday.

Like the past several days, the capital’s three inter-district bus terminals at Gabtali, Sayedabad and Mohakhali, along with Kamalapur railway station and Sadarghat ferry terminal witnessed a huge outgoing crowd.

Being panicked by the coronavirus, many city-residents are leaving the capital for their ancestral homes, Sakhawat Hossain, supervisor of Zaker Paribahan, told the daily sun.

People working in transportation services such as buses, CNG auto rickshaws and ride-sharing services say that the number of passengers has dropped significantly.

Saiful Islam, a driver of the Biswa Zaker bus service that runs from Gabtoli to Jatrabari, said, "I used to earn at least around Tk3,500 in four trips daily, but the income has gone down for the last few days," .

Like city buses, the CNG auto rickshaws on Dhaka city roads have also been getting fewer passengers.

Faruk Hossain, a CNG auto-rickshaw driver, said he normally earns Tk1,500 between 8am to 2pm, but his income has shrunk significantly over the last few days.

"Yesterday, I earned only Tk1,200. I paid a deposit of Tk1,000 for the vehicle and bought CNG gas for Tk200 so I went home empty-handed," said Faruk, who started the profession 30 years back.

Another CNG auto-rickshaw driver named Mohammad Farhad shared a similar story of getting very few passengers in the city.

Although the authorities concerned, including the ministries of education and health, asked students to stay inside homes during the holiday period and urged the guardians to ensure it, most guardians are not complying with the warning.

The rush of the home-bound passengers-carrying vehicles for crossing the river Padma at Paturia of Manikganj was so huge on Friday that the ghat authority had to face the additional music.

The home-goers have to suffer due to long tailbacks at the busy ferry ghat.

Due to the crisis of ferries, passengers are being compelled to wait at the ferry ghats for three to six hours to cross the river Padma, ghat sources said.

Over 200 passenger buses, 300 trucks and around 150 private cars got trapped in long tailbacks at Paturia ferry ghat on Friday morning.

BIWTA, Aricha office unit GM Zillur Rahman said, “We have to face additional pressure as a good number of passenger buses, trucks and private cars arrived in this ferry ghat due to holiday on Friday. Fourteen ferries are plying on the route."

The transport sector, especially bus, is facing a tough time as the number of passengers has dropped due to coronavirus scare. But the bus and railway stations in Dhaka witnessed a different scene on Friday.

Abul Kalam, a passenger, said, "There was a big queue at the ticket counter and bus operators were charging Tk 50 to 200 more for each ticket, citing scarcity of tickets,"

Bangladesh Railway officials said usual measures were taken to keep the trains clean while all concerned were asked to follow the government directives to prevent the spread of the virus.