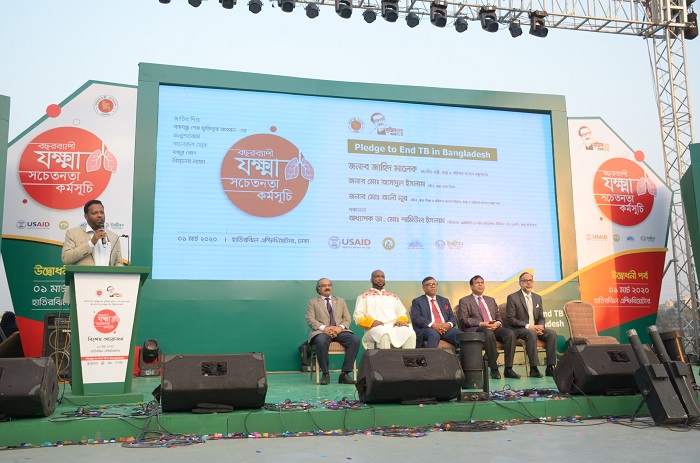 Over 1,000 people joined hands with renowned music band, Joler Gaan, in Dhaka to end tuberculosis (TB) as part of launching the “Pledge to End TB in Bangladesh” campaign supported by the United States Agency for International Development (USAID), the U.S. Government’s lead development agency, and Bangladesh Ministry of Health and Family Welfare. Over the next year, the campaign, implemented by USAID, in collaboration with National TB Control Program (NTP), will raise awareness among Bangladeshis, especially vulnerable communities, to better detect and treat TB.

TB is an ancient infectious disease that continues to claim millions of lives.  Bangladesh is one of the highest burden TB countries in the world.  Although preventable, treatable, and curable, approximately 47,000 people in Bangladesh died due to TB and an estimated 90,000 people (including 24,000 children) with TB remained undetected in 2019.  Hence, it is critical for Bangladesh to shift the current trajectory by focusing beyond the epidemiological approach and taking a comprehensive consideration of other issues relevant to addressing TB.

At the launching event, USAID Mission Director Derrick S. Brown said, “As Bangladesh moves forward to celebrate its fiftieth year of independence next year, it is time that we all reinforce efforts, engage all sectors - both public and private - increase coordination, and utilize resources effectively to make Bangladesh a TB free country.”

In Bangladesh, USAID works with the NTP to improve detection, diagnosis and treatment of all forms of TB across the country.  Over the past decade, USAID has spent more than $100 million to improve TB services in Bangladesh.