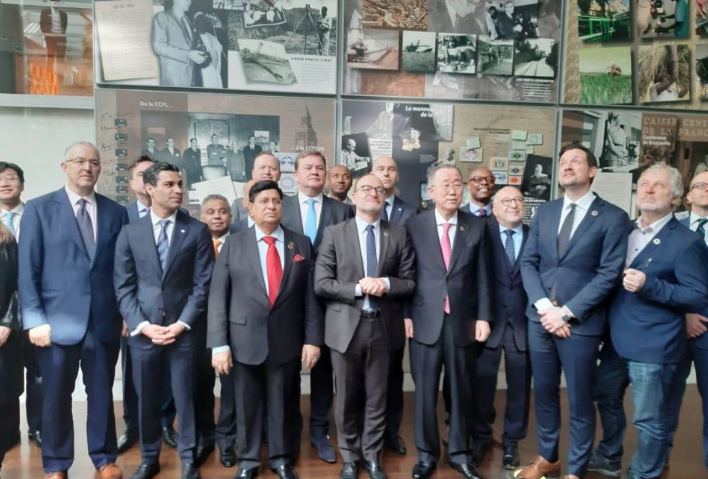 The global leaders at a high-profile meeting in Paris on Thursday praised the Government of Bangladesh for its commitment and measures to fight the adverse impacts of climate change.

The Bangladesh Foreign Minister attended the board meeting of Global Center on Adaptation held in Paris on Thursday (Feb 27) when he urged the global community for special focus on South Asian region while allocating funds and programs for its extreme vulnerabilities to climate change.

He also put emphasis on the need for technology transfer, recognizing local based solution and innovation and public awareness for combating the menace of climate change.

The Foreign Minister also gave an account of the activities that Bangladesh has undertaken to adapt to the harmful impacts of climate change, including developing flood, drought and salinity resistant seeds, harvesting rainwater, rooftop gardening, introducing boat-schools, floating agriculture, trust fund from own resources etc.

The discussion in the meeting broadly centered around the ways and means to bring back the issue of adaptation to the mainstream of climate negotiation and funding strategies  for ensuring accelerated adaptability against climate change through forming effective partnerships among public, private and philanthropic entities.

The meeting also discussed the governance issues of the newly formed organization and the proposed regional offices. It may be mentioned that the regional office of GCA for South Asia will be located in Dhaka.

The Foreign Minister was invited to be a board member of the newly formed Global Center on Adaptation due to spectacular record of Bangladesh in terms of climate adaptation and disaster management.

World leaders who have been vocal on the issue of climate change were present in the meeting, which includes former UN Secretary General Ban Ki-moon and Ministers from the Netherlands, Norway, and Sweden and Mayors from Paris, Rotterdam and Miami. China, Philippines and Bangladesh were invited to be board members from Asia.

Momen had discussions on the Presidency of Bangladesh of the Climate Vulnerable Forum and the projected programs and actions during the presidency. He also discussed the modalities of the soon-to-be-established Dhaka regional office of GCA with the officials of the GCA headquarters.