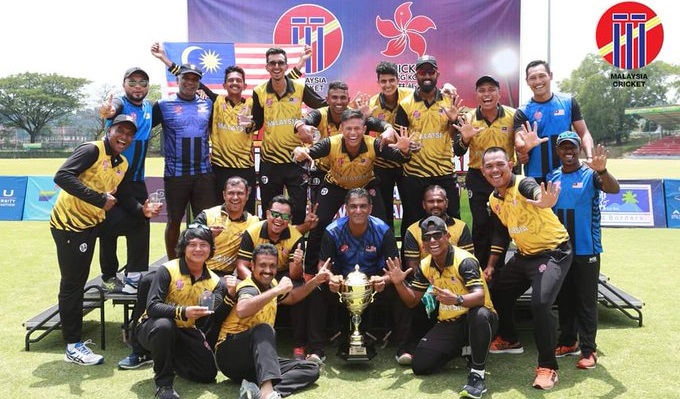 With a comfortable 6-wicket victory at Kuala Lumpur on Thursday, Malaysia completed a record-breaking whitewash of Hong Kong in their five-match T20I series ahead of the Asia Cup Eastern Regional Qualifier, in which both teams will be participating later this week.

Ranked fully 19-places beneath Hong Kong ahead of the series, Malaysia's sweep of the Inter-Port series represents, in terms of ranking differential, by some distance the greatest whitewash-upset in the history of the game.

The first match of the series, which had been relocated from Hong Kong to Kuala Lumpur owing to concerns regarding the ongoing Coronavirus outbreak, saw the impromptu hosts set the tone for the remainder of the series with a convincing 21-run win in the rain-abbreviated opener.

Offspinner Khizar Hayat took five wickets for just four runs, the best ever T20I figures for a bowler on debut, to see Hong Kong stumble to 61-8 in pursuit of a revised target of 83 in the 9 overs that the rain permitted them, after Malaysia's innings had been cut short by the elements at 123-3 after 16.3 overs.

Keeper-opener Virandeep Singh (32 from 23), skipper Ahmed Faiz (40 from 39) and number four Syed Aziz (27 from 20) provided the bulk of the runs. The trio would continue to score heavily for the remainder of the series, with Singh topping the run tables with 174 at 34.8, whilst Faiz would contribute 162 at 40.5 and Aziz 118 at 29.5, while for Hong Kong, Kinchit Shah would be the only batsman to make triple figures over the course of the five games.

The three would again underpin the Malaysian batting effort in the second game, Singh falling 4 short of a half-century after the early rain relented to allow Malaysia to win the toss and elect to bat, whilst Faiz and Aziz both made 21 as the hosts put up 138 from 19 overs remaining. Pavandeep Singh would strike twice in the first over of Hong Kong's reply to remove Nizakat Khan first ball and Kinchit Shah three balls later, before his new-ball partner Syazrul Idrus struck twice in the 4th over to reduce the visitors to 4-8. The innings would never really recover, though Waqas Barkat and Hong Kong skipper Aizaz Khan would restore some degree of respectability with a 52-run partnership for the 7th wicket, Fitri Sham's three wickets for 22 would ensure Hong Kong fell 35 short of the total.

Faiz would lead from the front yet again in the third game, top-scoring with 58 off 46 balls as the hosts put up a competitive 152-9 from their 20 overs, and despite the defiant efforts of Waqas Khan and Scott McKechnie, who hit 60 off 47 and 38* off 31 respectively, Hong Kong would again fall short, Idrus figures of 3-17 in 4 the stand-out as Malaysia sealed the series with an 8-run win.

Faiz' fortune with the coin would persist, again winning the toss and electing to bat first in the fourth match, which would follow the pattern of the preceding three. Singh would make it to his well-earned half-century from the top of the order before falling the Aizaz Khan, with Hayat, promoted up the order to three, driving the pace with a 17-ball 28. Faiz would again contribute too with a 33-ball 43 from number 4 as his side racked up 167-7 before the break, despite Kinchit Shah's economical, if wicketless, spell of 19-0 in 4. A brisk start would see Hong Kong race to 40 without loss in the first 4 overs, but the introduction ofr Anwar Rahman precipitated the breakthrough, Nizakat clean bowled for 29 in the 5th, and the left arm spinner would keep the scoring in check from then on, giving away just 19 runs from his 4 overs as Hong Kong fell further behind the asking rate, Kinchit's unbeaten 24 off 12 balls at the death not enough to drag Hong Kong back into contention as they sank to a 13-run defeat.

With Faiz out for the final game, stand-in skipper Singh was unable to replicate his luck at the toss and Aizaz Khan took the opportunity to bat first for the first time in the series. The break seemed to be paying off for Hong Kong as they racked up 171-7 in the first innings, with Kinchit Shah again top-scoring for them with 72 off 46. It would not be enough to forestall the ignominy of a whitewash, however, Aziz taking his chance to record a half-century in the final innings of the series, his 33-ball 50 the stand-out of an all-round effort that saw all of the Malaysia's top six pass 20, the hosts cruising to a comfortable win with 9 balls to spare.

In light of the egregious disparity between the teams in terms of T20I rating, the series scoreline casts as much doubt on the credibility of the ICC rankings as it does on the depth of the Hong Kong squad. The loss recent of at least five first-choice players to a combination of dressing room mutiny, match fixing suspensions, and the lure of opportunitiesin Full Member countries saw Hong Kong hand out five fresh caps over the course of the series, and the former ODI-side that came close to upsetting India at the last Asia Cup must rank as underdogs to even get through the Eastern Regional Sub-Qualifier for this year's edition.

Malaysia, meanwhile, will head to Bankok next week brimming with confidence. There they will meet hosts Thailand, together with Hong Kong, neighbouring Singapore and favourites Nepal - with China, Bhutan and Myanmar having pulled out of the tournament owing to the same coronavirus concerns. The five remaining sides will compete for two slots at the Asia Cup Qualifier Final, which will be hosted in Kuala Lumpur in August.