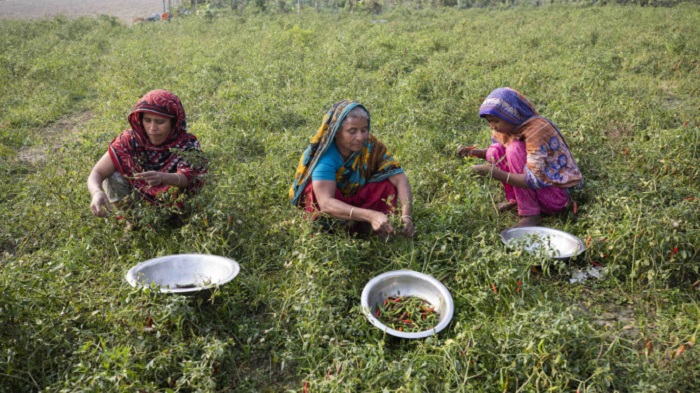 Farmers of three Upazilas in Jamalpur have set an example for the rest of the country’s farmers by cutting out the middlemen and creating direct access to the agricultural value chain process.

Around 20,000 smallholder farmers and their households have increased their income through this initiative.

The NSVC project impacts 20,000 smallholder farming households and has 90,000 direct beneficiaries from 21 unions of the Jamalpur district. The project’s main goal is to improve nutrition, increase gender equity and drive the economic empowerment of these farming households.

Now the farmers, both the male and female, directly communicate with dealers and wholesalers and bring their products at the special collection points allow the wholesalers to collect the products at bargaining prices.

Collection points – the term for small local markets under the NSVC project – are held twice every week and farmers sell their fresh produce there.

Sapna Akhter, some years ago who was merely a homemaker of Islampur Upazila in Jamalpur district, has become a smart farmer on her own.

Taking with this correspondent, Sapna said last year she cultivated mustard on over 25 katha lands and produced eight maunds of mustard.

“I was able to sell mustard seeds at Tk 1700-2000 a kg. I also cultivated paddy, brinjal and chilli and sold those at fair prices,” said Sapna.

She said they are now well connected with the value chain and they don’t have to face any intermediaries. They bring their crops at the collection point and sell the wholesalers directly.

“We are being benefited in two ways. First, we are selling our products at bargaining price and don’t have to spend any money on transportation,” she said.

Shapla Begum, another farmer in the area, made a difference in her way of overcoming tough times and becoming a role model for other farmers in her community.

After her husband’s death in a road accident, Shapla began to fight for survival with her two kids.

But thanks to the NSVC initiative, she now drives a power tiller and making money.

Md Shahidullah, another beneficiary farmer of the same community, said they no longer depend on the middleman to sell their crops. Now they have direct access to markets and wholesalers from big cities are also now connected with them.

Md Ibne Mizan, Sub Assistant Agriculture Officer of Islampur Upazila, told the Daily Sun that the government has provided necessary support to the initiative to connect farmers directly to the value chain.

“This is the right model for farmers. The incumbent government has taken the same model for the development of farmers across the country,” said Ibne Mizan.