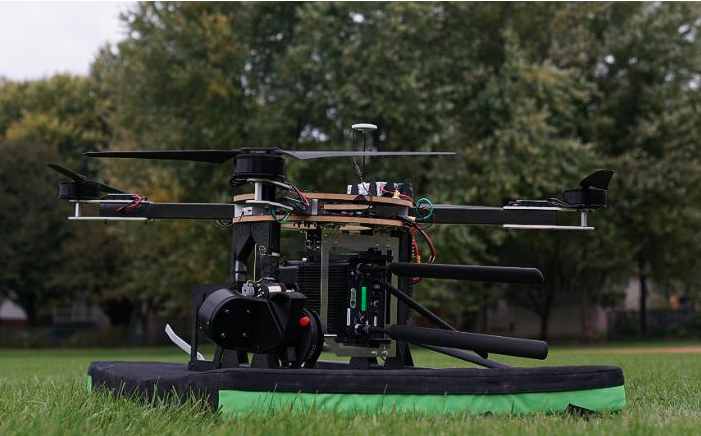 Tech giants including Google and Facebook have spent years trying to figure out how to bring the internet to billions of people who still lack a reliable connection. Now, an American startup has come up with its own plan.

Telelift is an attempt to create a "flying cellphone tower." It uses drones the size of a dining table, which are attached to the ground by a long wire and, according to their maker, can stay in the air for at least a month.

Rahul Tiwari, 22, came up with the concept in the summer of 2017 while studying engineering at Purdue University in Indiana. His drones hover at 200 feet while attached to solar panels or a power source on the ground, using around the same amount of power as a microwave.

Tiwari initially intended his drones to be used as anti-poaching "flying watchtowers" in Africa, but when he spoke to industry insiders, he saw a bigger potential.

"If we took the drones that we were building — that were very powerful, they could fly for a very, very long time — and basically stuck 4G routers on them, we could bring the internet wherever we want it," he tells CNN Business.

There are roughly 4 billion people still without internet access globally, according to GSMA, which represents mobile operators worldwide.

Mobile access is growing quickly in Sub-Saharan Africa, and internet is central to improving opportunities in rural communities, according to a report from GSMA. But maintaining infrastructure in sparsely populated areas is often uneconomical for networks.

Loon, a project run by Google's parent company Alphabet (GOOGL), has been developing tennis-court sized balloons that fly 12 miles high, capable of serving the internet within a 25-mile radius. In 2018, Loon announced it was partnering with Telkom Kenya to deliver internet to regions of central Kenya.

Twala says regulators could be appeased by the "umbilical cord" that allows a tethered drone to be recovered. Telelift has a back-up battery and control system so it can remain aloft even if the tether is cut, landing when safe.

Gokhan Inalhan, professor of Autonomy and Artificial Intelligence at Cranfield University, in the UK, tells CNN that Telelift appears to be an "excellent product" for emergency response or search and rescue. But he adds that continuous use could be "problematic" because many drone components are "not intended to be used 24/7" in extreme conditions. He says that improved engines and materials are needed for drones to cope with continuous operation and the African heat.

Tiwari says that while some of his components are off-the-shelf, the moving parts he uses are specially designed to be resistant — and although they should be able to fly indefinitely, in practice, some of the drones would land at times of day when there is less internet demand.