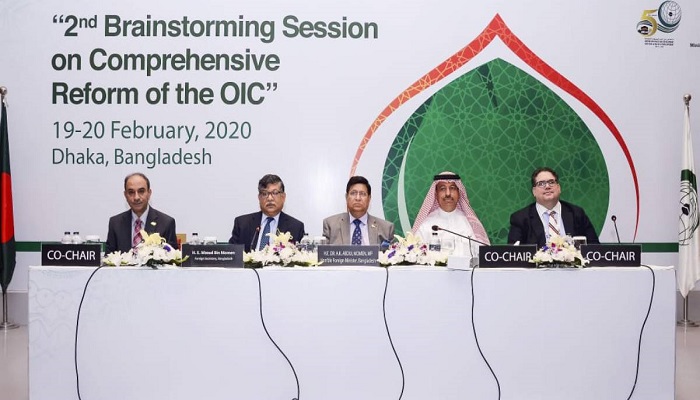 Bangladesh has called for ending infighting among the Muslim Ummah saying development is a priority as it may solve many problems automatically.

He made the remarks while addressing a two-day second brainstorming session on 'OIC Reform' that began at a city hotel on Wednesday.

Foreign Secretary Masud Bin Momen and OIC leaders were, among others, present.

The Foreign Minister said ideas and concepts should come suggesting innovative ways and means for faster development of the Muslim world using complementarities and strategic resources it possesses.

He said the question of an equitable identity for the Muslim population must be incorporated into the domain of deliverables that the OIC mechanisms and programmes can shape.

Dr Momen appreciated The Gambia and the whole brotherhood of the OIC for its innovative approach towards resolving the Rohingya crisis through international legal mechanism at the ICJ.

The Foreign Minister said they need to identify ways and means to engage non-state actors like the private sector and civil society that are emerging to make a difference in new partnership models.

"We must harness the energy of the youth and the women to encourage various professional associations and networks such as the STI community in furthering OIC objectives and advancing its collective agenda," said the Foreign Minister.

Bangladesh, since its joining the OIC under the leadership and vision of the Father of the Nation Bangabandhu Sheikh Mujibur Rahman and especially under the government of Prime Minister Sheikh Hasina, has always had great hopes about a self-reliant OIC, he said.

Mooting of the idea of an Islamic common market, proposing OIC games, bringing climate change and blue economy in the OIC discourse and programme of action, taking up regional economic integration programmes are just some cases in point, said the Foreign Minister.

"Reform must, therefore, provide for synchronisation of the political OIC and the Economic OIC," Dr Momen said.

The Foreign Minister urged the delegates from all OIC member states, OIC General Secretariat, and Organs of OIC to offer views and visions to identify areas, issues and possible solutions towards a comprehensive reform of the OIC.

He hoped that delegates would come up with mechanism for making the organisation more relevant to the Ummah that it serves keeping national interests aside.

The Foreign Minister noted that Bangladesh always wants to ensure that mechanisms and initiatives created for dispute and conflict resolution and diffusion of tension through peaceful means like mediation, arbitration, joint diplomatic moves and peace-making/peace-building missions are activated, harmonized and put into operation.

The two-day session, jointly co-chaired by Bangladesh, Turkey and Saudi Arabia for reengineering legal, political and administrative architecture of the OIC is expected to come up with stronger policy recommendations, said the Ministry of Foreign Affairs.

The recommendations will be discussed at the next council of Foreign Ministers to be held in April 2020 in Niamey, Niger.