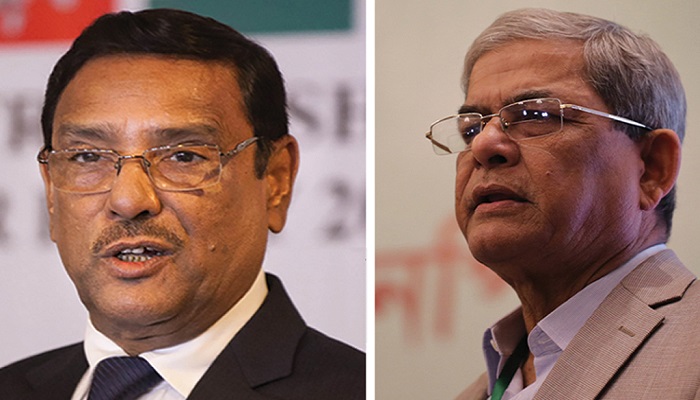 Terming the denial, made by BNP leader Mirza Fakhrul Islam Alamgir about a phone conversation over Khaleda Zia’s release on parole as 'false’, Awami League general secretary Obaidul Quader on Tuesday said he had evidence of the talk.

“He (Mirza Fakhrul Islam Alamgir) has lied about the phone conversation. If anyone wants, I can show the evidence of the talk over phone. But, I don’t like to go far about the issue and prove him wrong,” he said.

Quader, also the road transport and bridges minister, came up with the claim while talking to reporters after attending an AL meeting at party president Sheikh Hasina’s political office in the capital’s Dhanmondi area at around 12:00 pm.

Quader’s comment came a few hours after BNP secretary general Mirza Fakhrul Islam Alamgir said he had no phone conversation with him over the release of party’s chairperson Khaleda Zia on parole.

The BNP leader made the remark while talking to reporters after paying homage to BNP founder Ziaur Rahman at Sher-e -Bangla Nagar in the capital at around 10:30 am.

“Family members of the BNP chairperson are dealing with the issue of filing application for her release from jail. I had no conversation with Obaidul Quader in this regard,” the BNP leader said.

Earlier on Friday, the AL general secretary claimed that Mirza Fakhrul Islam Alamgir phoned him and sought Prime Minister Sheikh Hasina's intervention for the release of Khaleda Zia on parole.

On the day, the road transport and bridges minister, at a press conference, said, ““I had a discussion with Mirza Fakhrul Islam Alamgir on the release of Begum Khaleda Zia on parole over telephone. He (Fakhrul) requested me over phone to discuss the issue (Khaleda Zia’s release on parole) with Prime Minister Sheikh Hasina.”