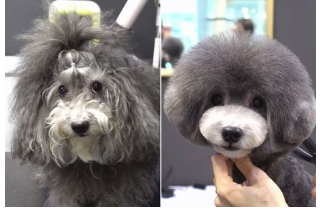 We all have an idea of what a poodle should look like, right?

Well one silver poodle recently took a trip to the groomers, and she didn't exactly look like what you'd expect.

The scruffy (but totally adorable) dog has been compared to Hagrid from Harry Potter on YouTube, after a video of her transformation was uploaded to the channel Shu and Tree.

At the start of the video the grey and white dog has wild curly fur that has gotten so long, she has had to have it tied back in a pony tail on top of her head to keep it out of her eyes.

The groomer quickly snips away the elastic band holding the fur back and gives the pooch a good wash.

Once clean and dry, the real work starts and viewers can watch as the straggly fur is brushed and cut and the dog's tiny body is slowly revealed.

The video is five minutes and forty seconds long and by the end of it all, the dog is completely unrecognisable - which was bound to have been a shock for her owners when they picked her up.

People in the comments section were also shocked by her makeover.

More than eight million people have viewed the video, giving it 125,000 likes.

One person replied: "This dog literally transformed into a princess."

"By the end she's looking around so much because she can actually see," commented someone else.

A fourth person added: "I bet that dog might have felt himself go all light after that fur chopping."

"She was looking like Hagrid," added a different user.

A similar thing recently happened in Florida, when Carley Coca went to pick up her seven-year-old Samoyed named Nanuk from her local groomer.

She'd taken her pet in for a "trim" but it seems there was a bit of a mix-up in communication along the way.

When the 28-year-old arrived to pick up her fluffy white  dog she was surprised to discover he was completely bald - and would have to wear sun cream until his fur grew back.

Nanuk ended up looking more like a British Bull Terrier than a Samoyed - but luckily Carley saw the funny side of the situation.

he said: "When I went to pick up Nanuk from the groomers, I literally said out loud, 'That's not my dog'.

"The groomer assured me it was Nanuk and I even had to call him to check, but he looked like a complete different breed."