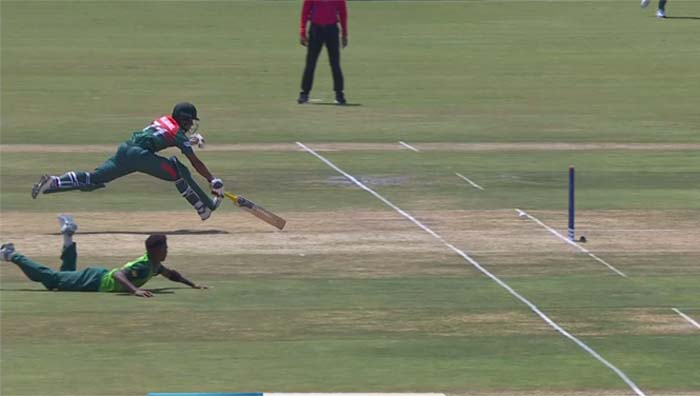 Bangladesh U-19 cricket team stormed into ICC U-19 World Cup semifinals beating South Africa U-19 team by 104 runs in the Super League Quarter-final-3 at the Potchefstroom in South Africa on Thursday.

Bangladesh will now face New Zealand in the semi-finals. The best South Africa can now hope for is to finish fifth.

The Bangladesh bowlers were superb to defend 261 scored by the batsmen in first innings. Bowlers kept their grips tight on Proteas batsmen from the very beginning and manage to bundle out the hosts for 157 in 42.3 overs.

Rakibul was the star of the show, taking excellent figures of 5/19 in 9.3 overs, and it was a fine all-round performance from Bangladesh.

Earlier, junior Tigers posted a handsome fighting total of 261 runs for 5 wickets as they were asked to bat first by South Africa U-19 National Cricket Team.

Opener Tanzid Hasan was the highest scorer for the side with 84 ball-80, striking a dozen of boundaries. Shahadat Hossain blasted an unbeaten 74 off 76 with seven fours and one six while Towhid Ridoy chipped-in-with 51.

Riding on three half-centuries, Bangladesh racked up a total that helped them reach a comfortable position.

Bangladeshi youths got a decent start through openers Parvez Hossain Emon and Tanzid Hasan, who combined for a 60-run for the opening stand with the former making 17.

Mahmudul Hasan Joy (3) couldn’t contribute much but Tanzid shared another significant 57-run with Ridoy before being dismissed. Ridoy and Shahadat then added 102-run for the fourth wicket stand in a show of attacking batting. Though Ridoy was removed after reaching the half-century, Shahadat batted till the last to ensure that Bangladesh would get a healthy total.

Desperate to seal the semifinal deal, Bangladesh came up with tight bowling and Tanzim Hasan Shakib made the first breakthrough by removing Khanya Cotani for 15.

Luke Beaufort however held together the South African innings but Rakibul came back in his second spell to get the better of him as he scored 60.

Along with Rakibul, Shoriful Islam and Shamim Hossain also joined in the carnage to leave South Africa in vulnerable state. The trio cleaned up the tail to ensure Bangladesh’s massive victory.