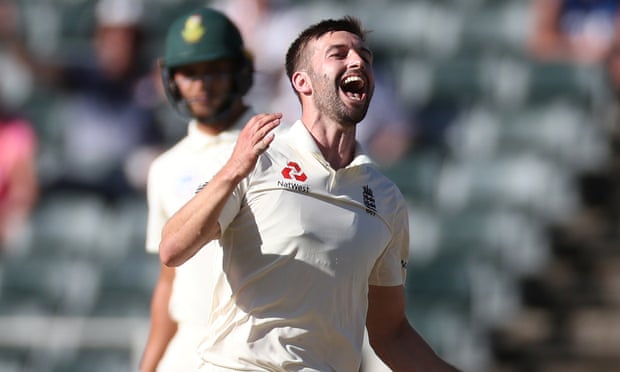 The dynamic Durham pace duo, who are never seen at Chester-le-Street, bowled England to victory on the hottest, steamiest day of the series. Ben Stokes and Mark Wood shared six wickets as England completed yet another emphatic Test win to seal the series 3-1. Here the margin was 191 runs – it was 189 runs in Cape Town, an innings and 53 runs in Port Elizabeth. The Test at Centurion now seems a century ago.

The Durham monopoly extended to the end-of-series celebrations. Wood finished with nine wickets in the game and was given the man of the match award; Stokes was the man of the series. He has long since given up any hope of anonymity. In this series, after a late arrival because of accepting the BBC’s Sports Personality of the Year award in Aberdeen, he has had to deal with his father’s ill health, a little fracas with a spectator here at the Wanderers on the first day, which grabbed the headlines in between delivering vital runs, wickets and catches, which he has done in abundance.

It has been a harmonious series but for a moment or two tempers were frayed among the senior citizens on this final day, a consequence of the heat and a condensed, sapping schedule perhaps. In mid-afternoon Stuart Broad and Faf du Plessis exchanged pleasantries. Broad was no doubt unhappy that he and his colleagues had been in the blazing sunshine for over four hours with very little to show for it and a ball he disliked. Du Plessis was none too enamoured by a throw from Sam Curran at mid-on that seemed to have been aimed in his direction. Du Plessis and Buttler appeared to collide.

It was a rare flashpoint, which should not trigger a draconian reaction after a series notable for healthy competition and mutual respect between the players. And perhaps this was an indicator that the South Africans were at last fighting with great resolution despite being in such a precarious situation. For a while battle was engaged on Monday with Rassie van der Dussen coming to the fore and within two runs of becoming South Africa’s first centurion of the series.

Under a cloudless sky it soon became clear that England would have to sweat for longer to bowl South Africa out a second time. Broad and Curran shared the new ball but neither threatened much. The first hour passed peacefully; drinks were much needed. Then as happened to Pope earlier in the match the drinks interval struck. Pieter Malan, whose concentration has been far more impressive than his range of strokeplay, drove loosely at the first ball from Chris Woakes after the resumption and Stokes took the catch at second slip.

Van der Dussen’s progress was hastened by the introduction of Root’s off-spin and the batsman’s determination to be proactive. He reverse swept twice for boundaries and drove cleanly for six to the leg side during two overs of off-spin at the end of which it became apparent that Root’s last three overs in Test cricket had yielded (including byes) 54 runs.

It was time for Stokes to restore order and he delivered once again. A bouncer surprised Elgar, whose attempted pull shot lobbed gently back to the bowler from the splice of the bat. So lunch was more palatable for the fielding side. Stokes and Wood, the most threatening bowlers, began after lunch and tested both batsmen. Du Plessis took 18 balls to open his account. After 50 overs, during which England had bowled well, just two wickets had been taken. Root tried Joe Denly’s wrist spin to no avail with Van der Dussen cashing in once more.

Suddenly South Africa were 180 for two and England were feeling the heat. Now there was the little contretemps between Du Plessis and a gaggle of fielders. Wood responded with a short ball striking Van der Dussen a painful blow on the chest. Then Stokes rumbled in at Du Plessis and the ball kept low taking the bottom of the bat before striking the stumps.

In the next over Root decided to adopt a bouncer field for Van der Dussen who was now on 98; there was no slip and several scouts out on the leg side as Wood ran in from around the wicket. The first delivery was duly dug in short but the next one was surprisingly full. Van der Dussen scented three figures and drove – in the air – to the solitary and soon to be jubilant fielder in front of square on the off-side, Broad, who remembered how to smile again. So tea tasted quite palatable as well.

The Spin: sign up and get our weekly cricket email.

After the break there was a flurry of runs as the South Africans sensed that aggression was the only possible response, not that Quinton de Kock needs much encouragement to play his shots. Forty-eight runs came in six overs with Temba Bavuma picking up six quick boundaries. Then Broad produced something that really had him beaming. A short ball leapt up viciously at Bavuma who could only fend with his gloves. Another Broad bouncer (he had not really bowled one throughout the first three days) now prompted a hook which was top-edged by Dwaine Pretorius and well caught by Curran on the long leg boundary.

There was no fairytale exit for Vernon Philander in his last appearance. He was caught down the leg-side off Wood, a common dismissal in this series and a consequence of the prevalence of pace bowlers and bouncy pitches. By now the game was well and truly up and De Kock, the best South African batsman in the four Tests by a disturbing margin, swung wildly at Wood. A crazy tailenders’ run-out, another leg-side catch by the ever-reliable Buttler – behind the stumps, that is – and the celebrations could commence.