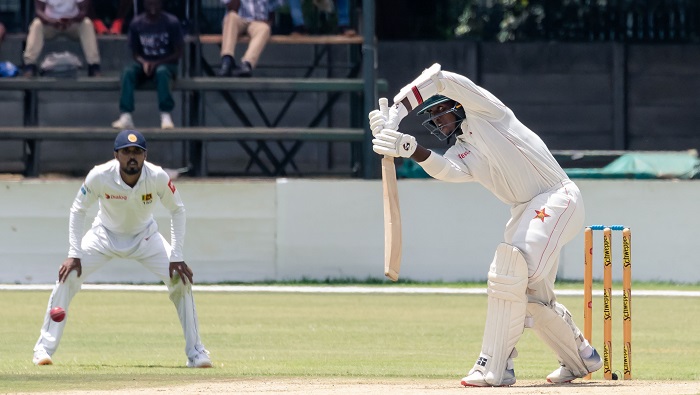 Zimbabwe's Kevin Kasuza (R) plays a shot during the fourth day of the fourth Test cricket match between South Africa and England at the Wanderers Stadium in Johannesburg on Monday. –AFP

Brendan Taylor and Kevin Kasuza combined to give Zimbabwe a solid start on the first day of the second Test against Sri Lanka in Harare on Tuesday, taking the hosts to 96 for two at lunch.

After winning the toss and choosing to bat, Zimbabwe lost Prince Masvaure and Craig Ervine cheaply before Taylor joined opener Kasuza in a third wicket partnership of 47.

Taylor was the dominant partner thrashing 41 from just 35 balls including six fours and one six over long-off from left-arm spinner Lasith Embuldeniya.

Kasuza, who was 'substituted' for the second innings last week after being hit on the head while fielding at short leg, was more circumspect, batting through the morning to reach 33 not out from 90 balls.

Zimbabwe made two changes to the side that lost the first Test by 10 wickets at the same venue last week.

Carl Mumba came in for fast bowler Kyle Jarvis who suffered a back injury in the opening Test while all-rounder Tinotenda Mutombodzi, who bowls leg-spin, came in for his Test debut ahead of Ainsley Ndlovu.

Sri Lanka made one change with left-arm pace bowler Vishwa Fernando coming in for Kasun Rajitha.