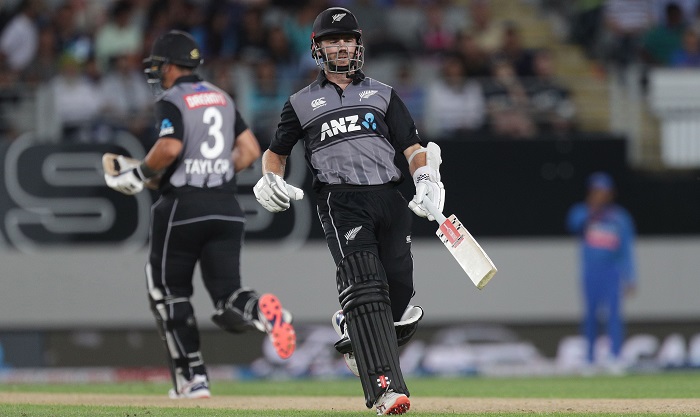 New Zealand's captain Kane Williamson (R) runs between the wickets during the first Twenty20 cricket match between New Zealand and India at Eden Park in Auckland on Friday. –AFP

Half centuries by Colin Munro, Kane Williamson and Ross Taylor laid the groundwork for New Zealand to post 203 for five batting first in the opening Twenty20 against India in Auckland on Friday.

Munro smacked 59 off 42 deliveries in a rapid opening stand with Martin Guptill (30) in which they put on 80 for the first wicket.

Williamson fired up in the second half of the innings with 51 off 26 and featured in a 61-run stand with Taylor who finished unbeaten on 54.

After losing the toss and being sent into bat, New Zealand were into their work from the second ball which Guptill drove to the fence.

By the time they reached the fourth over it was Munro who was in full flight, cracking 18 runs off Shardul Thakur.

Thakur's woes continued with the first ball of the next over by Jasprit Bumrah with a misfield which gifted another boundary to Guptill.

When Thakur came back for his second spell he was initially punished by Williamson who hit back-to-back sixes before his luck changed and he claimed Munro's wicket.

Medium pacer Shivam Dube took the first wicket in in his opening over when he had Guptill caught on the boundary, while Bumrah, Thakur, Shahal and Jadeja took a wicket each.