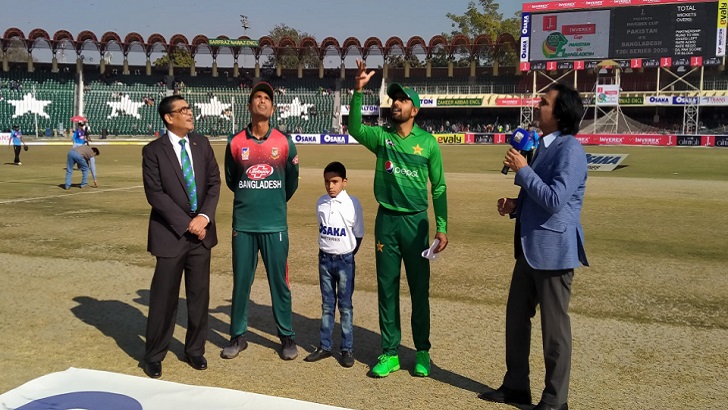 Bangladesh captain Mahmudullah Riyad decided to bat first after winning the toss in the three-match T20 Internationals opener against Pakistan at Gaddafi Stadium in Lahore on Friday.

The Tigers fielded seven batsmen and four bowlers-three of whom are pacers in their bid to win the match, with which the cricket takes the center stage, putting aside the security issue.

As the two batting stalwarts Mushfiqur Rahim and Shakib Al Hasan remained absent, the Tigers designed their middle order with the likes of Afif Hossain, Liton Das, Mahmudullah, Soumya Sarkar and Mohammad Mithun while Naim Sheikh would open the batting with Tamim Iqbal.

Bangladesh chose to opt out pacer Rubel Hossain and formed the three-pronged pace attack with Mustafizur Rahman, Shafiul Islam and Al-Amin Hossain while leg-spinner Aminul Islam Biplob would bring up the diversity in bowling.

In their last 10 encounters with Pakistan in the shortest format of the cricket, Bangladesh won just two and lost eight matches.

Overall in 92 T20 Internationals, Bangladesh won 30 in contrast of losing 60 while two matches were abandoned.

Pakistan played 149 T20 matches so far in which they won 90 and lost 55 while four matches were either abandoned or tied.

Despite the upper-hand in overall stat, Pakistan is facing off Bangladesh in the first T20 on the back of six straight defeats.