The curious case of onion 'lifting’ in Satkhira 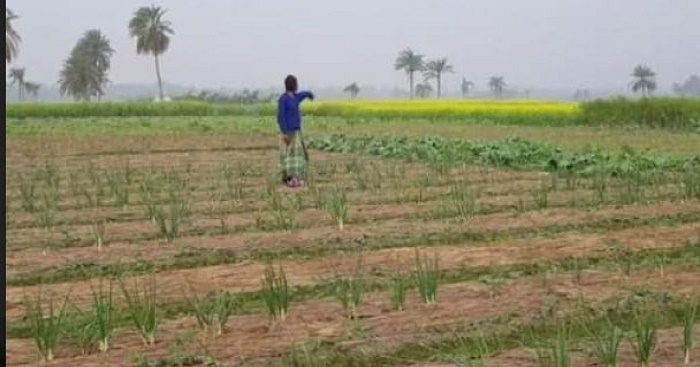 Farmers at Digong village of Kolaroa upazila in Satkhira are spending sleepless nights guarding their onion fields as rampant stealing of the much sought-after bulb directly from the field is leaving them despondent and distraught.

Even the local police are all at sea in their efforts to prevent onions being stolen at night in the district and have emphasised putting up a united resistance in this regard.

While talking to Ashraful, son of a farmer who spends the night watching over the onion fields, the UNB correspondent learnt that this new wave of crime has swept over the area and shows no sign of subsiding.

As it is impossible to guard the entire cropland, farmers try to protect one side of the field every day. Taking advantage of this situation, thieves target the unguarded side and are getting away scot-free.

Ordinary people revere the village ‘Dofadar’ according to Ejahar Ali, who holds that post in Helatola union parishad. Even he was not spared as thieves had stolen all the onions from his field.

“Farmers never had to guard the onion fields the way they are doing it now. Thieves began stealing onion as its price increased. As a result, farmers are compelled to pick onions from the fields before they are fully grown,” he explained.

The price of onion seeds increased with the price hike of the bulb, said Abul Hossain Bhutto, an onion farmer in Kolaroa upazila. “Already mired in crisis, farmers are now in despair with their onions being stolen.”

Sabur Dai, Nowsher Ali Dai, Nazrul Dai, Shahalam Gazi, Saidul Islam and Sattar Gazi, all onion farmers in the upazila, confirmed UNB that they had onions stolen from their own fields.

These farmers who were victims of this crime expect assistance from the administration to check onion stealing in the region.

Mentioning that he is aware of this matter, Saiful Islam, assistant police super of Special Branch in Satkhira, said an initiative will be taken to put up a collective resistance against onion theft.

“If someone lodges a complaint, action will be taken against the culprits after investigation,” he added.