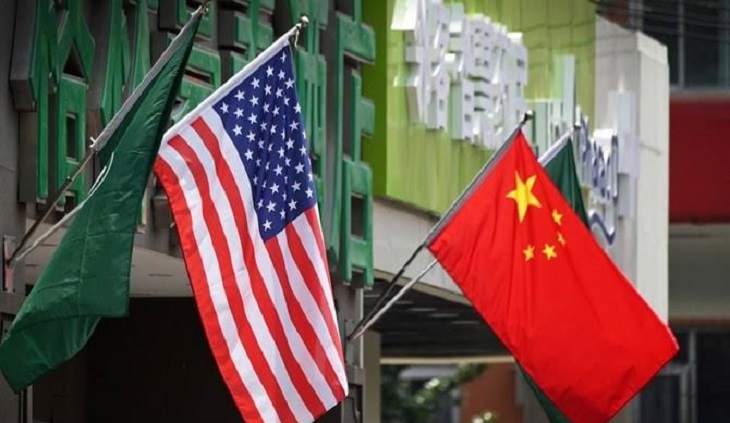 The huge difference in trade traffic is a key bone of contention for Donald Trump in a long-running stand-off that has seen him impose tariffs on goods worth hundreds of billions of dollars, triggering retaliation from Beijing and jolting the global economy.

In December, its surplus with the US was around $23.2 billion, from $24.6 billion the month before.

The mini trade deal announced last month will see Beijing buy an extra $200 billion of US products over a two-year period, according to Washington officials. China has yet to publicly confirm the figures.

The Trump administration called off new tariffs on Chinese-made goods such as electronics that were to take effect last month. It also halved those imposed on September 1 on $120 billion worth of products.

But Washington maintains 25 percent tariffs on about $250 billion worth of Chinese imports.

In a further sign of de-escalation, Washington on Monday removed the currency manipulator label it imposed on China in the summer.

At a news conference on Tuesday, spokesman for the customs administration Zou Zhiwu said that since November and December, Chinese imports from the US including of soybeans and pork have picked up.

Zou added that the increased imports from the US will not affect China's purchases from other countries.

He also said the trade tensions had "put some pressure on China's foreign trade and firms that largely trade with the US".

"Although our exports to the US have declined, the effectiveness of enterprises diversifying their markets has been significant," he said, adding that exports to non-US markets have risen and overall exports are still rising.

The signing of the new trade deal, which is part of a planned wider pact, will have an "important and positive significance" not just for China and the US but also the rest of the world, Zou said.

China's foreign trade volume fell slightly on-year in 2019, and its surplus with the world stood at $421.5 billion.

Meat imports spiked over the past 12 months as officials brought in 2.108 million ton of pork -- a 75 percent increase from the year before, while beef imports rose 60 percent.

The huge jumps come as the country's pork supply is hammered by an outbreak of African swine fever that has wiped out about 40 percent of the national pig herd.

Nick Marro at The Economist Intelligence Unit said China's overall export recovery in December is likely due in part to a low base of comparison from the year before.

"It was around this time last year when we first started to see the impact of both the trade war and the global electronics slowdown bite into China's trade data," he added.

While shipments to Europe and Southeast Asia are up, Marro said these markets cannot fully replace the US.

"However, China's efforts to pivot towards alternative sources of demand, as a cushion to lost US market access, may be starting to pay off," he said, adding that growth in shipments to Vietnam outperformed every other major export market.