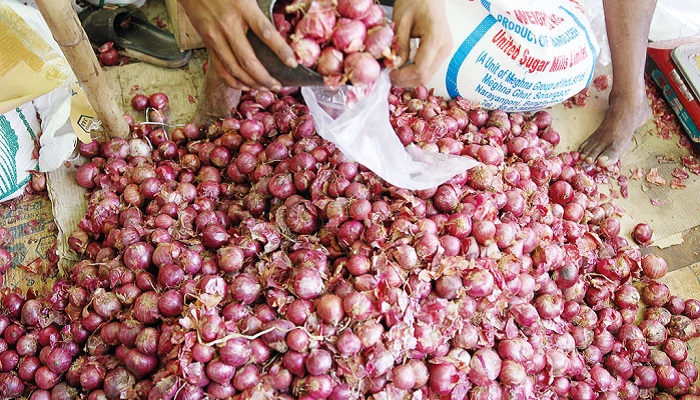 Prices of onions have started to come down again in kitchen markets of Dhaka.

The prices decreased by Tk 10-20 per kg on Wednesday from the previous day, said traders.

Visiting several kitchen markets of the capital on Wednesday, this correspondent found that locally-grown new onions were selling Tk 160-180 per kg and imported ones at Tk 70-90.

Vendors said the price of the bulb had risen due to a supply crunch following drizzles in many parts of the country a few days ago. Now its price is coming down in both wholesale and retail markets of the capital.

According to the data of state-run Trading Corporation of Bangladesh (TCB), locally-grown new onion was selling at Tk 140-160 a kg on Wednesday which was Tk 180-200 on Sunday. Besides, the imported bulb was selling at Tk 70-110 against Sunday’s Tk130 a kg.

The price came down as low as Tk 100 (local) and Tk 50 (imported) for the two varieties after fresh harvest of local onions and imported stocks hit the market. But it started soaring again after light rain hit the country from last Thursday and reached Tk 200 a kg in retail markets.

Azizur Rahman, a shopkeeper of Kaptan Bazar, said they were selling locally-grown new onion for Tk 160-180 per kg and imported ones at Tk 70-90.

“Today we bought onion at Tk 10-20 less from wholesale market at Shyambazar compared to a day ago. So, now we are selling those in low price too. Sometimes, wholesalers hike the price when there are no enough onions in the markets,” he added.

Khondoker Alam, a wholesaler at Shyambazar, told media that they sold locally-grown new onion at Tk 90-120 per kg while Chinese variety, Turkish and Egyptian ones at Tk 50-70 per kg on Wednesday.

He said the price came down by Tk 10-20 on Wednesday compared to Tuesday’s one following adequate supply in the market.

“The onion price went up due to the rain and bad weather. However, it started to fall at the wholesale market,” he added.

Mentioning that new onions are hitting the market in large volume, he said the price will come down further soon.

Meanwhile, per litre oil price increased by more than Tk10 compared to a week ago.

Almas Hossain, a shopkeeper of Bangshal area, said they were selling per kg open soybean at Tk 100 and palm oil at Tk 92 on Wednesday.

TCB data mentioned each kg open soybean price increased by 10.18 percent and palm oil rose by 19.12 percent compared to a month ago.

Meanwhile, each kg open soybean was sold at Tk 100 while palm oil at Tk 90-92 on Wednesday, which was Tk 90 and Tk 80 respectively a week ago. And five-litre bottle edible oil was sold at Tk 450 in retail market.

Besides, the prices of different vegetables decreased slightly in the kitchen markets in the capital.