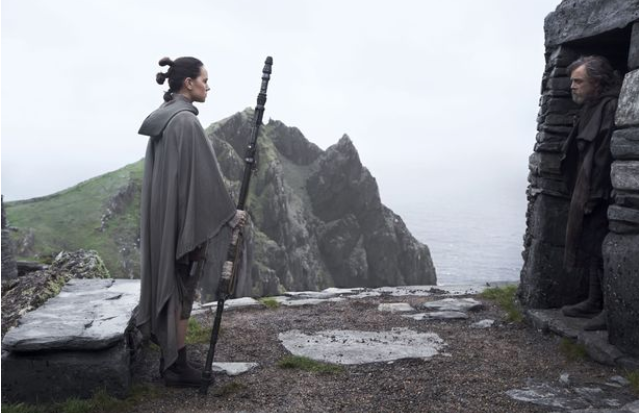 Star Wars may be set in a galaxy far, far away but a host of its filming locations are actually a lot closer to home.

Although the bulk of filming has taken place in studios - Pinewood Studios for the latest instalments of the franchise - there have been times when the cast and crew have gone on location around the world.

Which includes heaps of picturesque spots across the UK and Ireland. We're talking everywhere from rolling green hills and rocky landscapes to London tube stations.

We take a look at some of the Star Wars filming locations in the UK and Ireland, including those you can go and see for yourself.

The Rise of Skywalker

Ivinghoe Beacon in Buckinghamshire, England, has reportedly served as one of the locations for filming, with some of the cast - including John Boyega - being spotted at the picturesque spot.

Skellig Michael featured in the final scenes of The Force Awakens when Rey (Daisy Ridley) manages to track down Luke Skywalker (Mark Hamill). A UNESCO World Heritage site, you'll want to book early to visit as boat tours run from late March to early October, but demand can be high.

The Lake District also provided some of the epic, breathtaking backdrops which were used for sweeping landscape views, with spaceships digitally added into the shots. The likes of Derwenter and Thirlmere in Cumbria were used for filming.

Puzzlewood in the Forest of Dean also served as a location.

Skellig Michael was used as a filming location continuing on from the scenes in The Force Awakens, starring Daisy Ridley and Luke Skywalker.

However, a lot of filming was also done in Ireland, for the rocky landscape and breathtaking backdrops. Key filming locations included Loop Head in County Clare, Brow Head in County Cork, and Malin Head in Donegal.

Dingle in County Kerry was also used for filming.

Meanwhile, RAF Greenham Common in Berkshire, England, was used for filming airbase films in both The Last Jedi and The Force Awakens.

(We've also got a wider guide to The Last Jedi filming locations including Croatian hotspots which featured in the film).