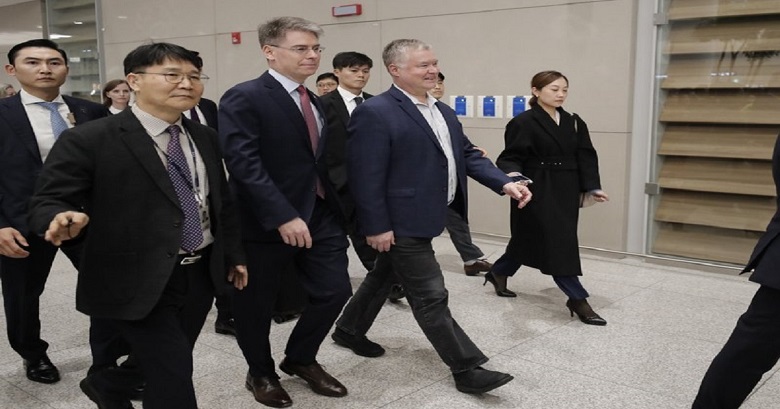 "On this point, let me be absolutely clear: The United States does not have a deadline," Stephen Biegun, the U.S. special representative for North Korea, told reporters. "We are fully aware of the strong potential for North Korea to conduct a major provocation in the days ahead. To say the least, such an action will be most unhelpful in achieving lasting peace on the Korean Peninsula."

Biegun, who was in Seoul for talks with South Korean officials, called on North Korea to sit down for talks.

"Let me speak directly to our counterparts in North Korea: It is time for us to do our jobs. Let's get this done. We are here. And you know how to reach us," he said.

It's unclear if North Korea will reach out to the U.S. to resolve their widening differences on how to achieve North Korean denuclearization.

Senior North Korean officials have recently said denuclearization is already off the negotiating table and they have threatened to lift a self-imposed moratorium on nuclear and long-range missile tests. In past months, North Korea has also conducted a slew of short-range missile and other weapons tests.

Worries about a major North Korean provocation grew after the country said Saturday that it successfully performed an unspecified "crucial test" that will strengthen its nuclear deterrent. Experts say the North could launch a satellite-carrying rocket or an intercontinental ballistic missile if the U.S. fails to meet the year-end deadline.

Friday's test was the second in a week at the rocket facility where North Korea has conducted missile-engine tests and launched satellites in what the U.N. called cover for testing its long-range missile technology.

North Korea's military chief Pak Jong Chon asserted Saturday that the North has built up "tremendous power" and that the findings from the recent tests would be used to develop new weapons to allow the country to "definitely and reliably" counter U.S. nuclear threats.

The test-flight of an ICMB would likely completely derail diplomatic efforts as President Donald Trump has viewed the North Korean weapons test moratorium as a major foreign policy achievement.

Biegun called the latest North Korean statements "so hostile and negative and so unnecessary." He said they don't reflect the spirit and content of the discussions the two countries have had since the North entered talks with the U.S. last year.

He said the United States has offered "any number of creative ways to proceed with feasible steps and flexibility in our negotiations to reach balanced agreements that meet the objectives of both sides."