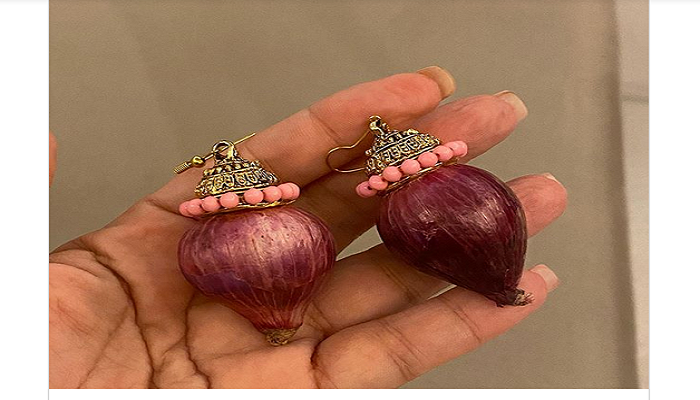 If we told you that something called onion earrings were a thing, you would probably brush it off as a joke. The reason we brought this up today is because Twinkle Khanna received the aforementioned accessory as a gift from her actor-husband Akshay Kumar. The 45-year-old author shared a glimpse of her "best present award" on her Instagram profile, on Thursday. In her post, Mrs Funnybones revealed that Akshay chanced upon the onion earrings while he was on the sets of The Kapil Sharma Show, where he was promoting his upcoming film Good Newwz. She revealed that Akshay's co-star Kareena Kapoor wasn't very impressed by the onion earrings, which is why he decided to bring them home.

Sharing the post on Instagram, Twinkle Khanna wrote: "My partner returns from performing at The Kapil Sharma Show and says, 'They were showing this to Kareena, I don't think she was too impressed, but I knew you would enjoy them so I got them for you.' Sometimes it's the smallest things, the silliest things that can touch your heart. #onionearrings #bestpresentaward."

Akshay Kumar frequently makes appearances on Twinkle Khanna's Instagram and we simply love it when that happens. A few days ago, Twinkle shared a picture of a cup of coffee that was make by Akshay and she wrote: "Writers need caffeine almost as much as pencils require graphite. But this is the reason why I have never asked him to make a cup of coffee for me again."

Twinkle Khanna and Akshay Kumar co-starred in films such as International Khiladi and Zulmi. They got married on January 17, 2001. The couple are parents to 16-year-old Aarav and Nitara (7).

Twinkle Khanna is a celebrated columnist and the author of Pyjamas Are Forgiving, The Legend Of Lakshmi Prasad and Mrs Funnybones - all of which were best-sellers. Twinkle is also an interior decorator, the owner of The White Window, and a film producer.