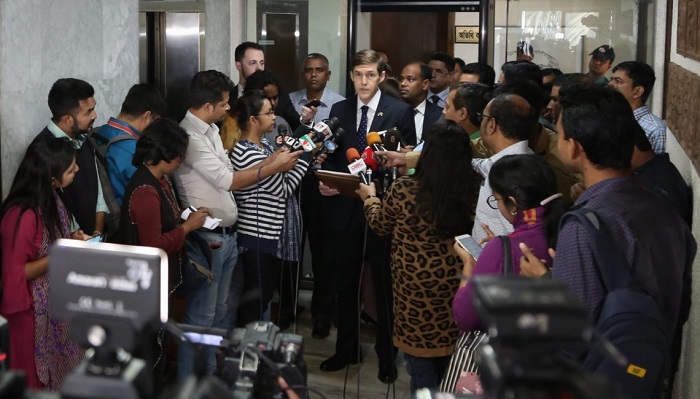 The US Departments of State and Treasury announced the imposition of financial sanctions under the Global Magnitsky programme on four top current and former Myanmar (Burmese) military leaders for their role in serious human rights abuses.

The US Ambassador to Bangladesh Earl R Miller revealed this to media on Tuesday.

The new imposition brings to nine the number of Myanmar (Burmese) security force members, plus two units, who have been sanctioned by the United States since 2017 for serious human rights abuses.

This action builds on recent designations made in July and imposes targeted financial sanctions on these four senior military leaders.

Elements of the Burmese military have committed serious human rights abuses against members of ethnic minority groups across Burma.  Such abuses and the continuing impunity must stop for Burma to transition to a more secure, stable, democratic, peaceful and prosperous nation.

Burma’s military must address the climate of impunity and cease abuses and violations of universally accepted human rights.  The United States prioritises the protection of fundamental freedoms and human rights as a key part of our vision for a free and open Indo-Pacific, recognising them as integral to US foreign policy and national security interests and in line with US values.

Such human rights abuse undermines the ability to realise the vision for a free and open Indo-Pacific that we share with ASEAN and other Indo-Pacific partners.

As the world recognised International Human Rights Day, the United States continues doing its part to promote accountability by remaining committed to the American ideals underpinning the Global Magnitsky programme.

“We commend the courageous work of civil society and all of you, the journalists, who play an important role in exposing human rights abuse and corruption and in holding public officials accountable.  Together, we must work to ensure those who have committed such acts are cut off from the benefits of access to our financial systems and our shores,” Miler added.