China rejects US views; says BRI inclusive, beneficial to all 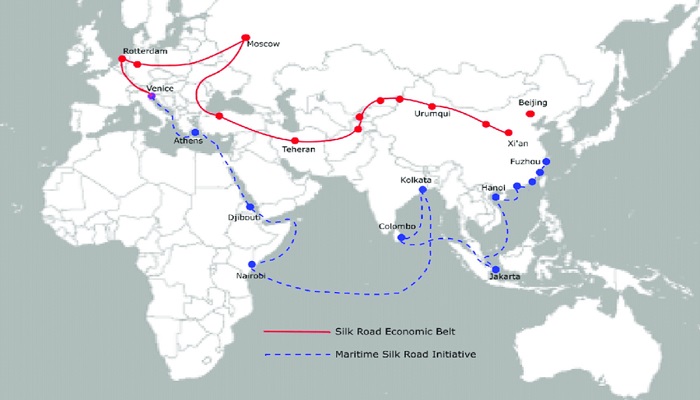 Chinese Ambassador to Bangladesh Li Jiming has sharply reacted to US’ views regarding Belt and Road initiative (BRI) maintaining that BRI is “open, inclusive and beneficial” to all.

“More than anything else, such malicious slander and irresponsible claim (by US) are certainly not the least helpful for any kind of peace and development in this region,” he mentioned in an article shared with the media on Tuesday.

The Chinese envoy referred to comments made by US Assistant Secretary of Defense Randall G Schriver during his recent visit to Bangladesh.

Ambassador Jiming said Schriver claimed that the BRI did not support free and open regional development nor ensure the protection of nations’ sovereignty and international law.

“The claim is rather groundless given where China is standing today in issues concerning global interest and international governance, in stark contrast with how the US has behaved in the past few years,” he added.

The Chinese envoy said proposed by Chinese President Xi Jinping in 2013, the BRI has been a trending word that frequents news headlines all around the globe, even more so in Bangladesh as it is one of the first South Asian countries to join the initiative.

“We highly appreciate that Bangladesh along with many other countries have showed great support towards BRI for their good faith in China and the benefits the initiative has already delivered to their people,” he said.

Ambassador Jiming said it also came up suspicions and speculations over China’s true intention by proposing the biggest public good the world has ever seen so far. “And in spite of repeated efforts of China in explaining the nature of the BRI, there is a curious obstinacy from some quarters that rejects the Chinese narrative and insists on making unsubstantiated allegations against the initiative.”

The Chinese envoy said nonetheless, seeing there is still an inadequacy of understanding on what BRI really represents as a whole, especially in certain developed countries who “falsely interpret” the initiative as a threat to the existing international order, he feels obliged to provide a more comprehensive explanation on what the BRI really is and the true spirit it embodies: openness, inclusiveness and mutual benefits.

He said the Belt and Road Initiative is proposed for building forms of connectivity among the continents and countries around the globe in order to facilitate closer cooperation in development and beyond.

Till date, more than 150 countries and international organisations have signed BRI cooperation documents with China, said the Ambassador.

He said the BRI would not pose any form of risk to its partners, which has been well proved in the practice and implementation of the BRI in the past six years.

“BRI is open, inclusive and beneficial for all. Moving into the future, China will seek to build a more dynamic and inclusive BRI by engaging in bilateral, trilateral and multilateral cooperation with all participants, an open, green and clean BRI that is transparent and free of corruption,” said the Ambassador.

He talked about a higher standard BRI that aims to improve people’s lives in line with the Sustainable Development Goals of UN 2030 Agenda, as stated by President Xi Jinping of China at the 2nd Belt and Road Forum for International Cooperation in 2019.

“China always stands by its words to welcome all countries to join the BRI in a common effort to make our world a better place,” said the Chinese envoy.