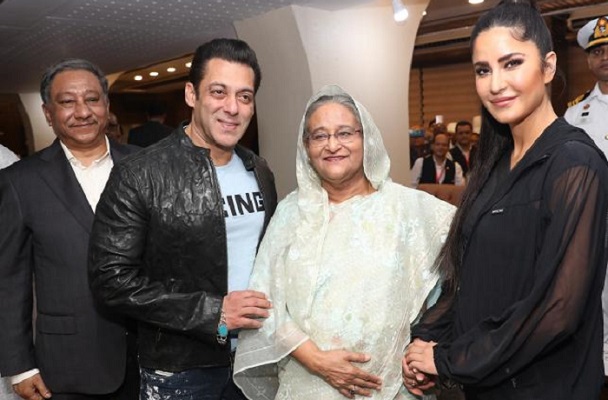 Bollywood superstar Salman Khan, who came to Dhaka on Sunday to perform in the opening ceremony of Bangabandhu Bangladesh Premier League (BBPL), paid glowing tributes to

Salman Khan along with another Bollywood superstar Katrina Kaif appeared together at the colourful stage at Sher-e-Bangla National Stadium in the capital on Sunday night before their last performance.

Salman Khan congratulated the people of Bangladesh on the occasion of the birth centenary of the Father of the Nation.

He also mentioned the leadership of Prime Minister Sheikh Hasina, saying she was elected the prime minister for the third consecutive time.

“Bangladesh people loved her (the prime minister) so much,” she said.

“My father told me that when you will go upon the stage, one man name you must take he is Kabi Kazi Nazrul Islam … my father is his big fan and he read most of his kabitas (poems),” he said.

Katrina Kaif in her address thanked the BBPL organizers for inviting them in the opening ceremony of the tournament and showed interest to come to Bangladesh again.

Both Salman and Katrina pointed out their meeting with Prime Minister Sheikh Hasina during the opening ceremony of the BBPL. “It was a wonderful moment for us,” they said.

They ended their speech uttering the slogan “Joy Bangla” and “Joy Bangabandhu”.