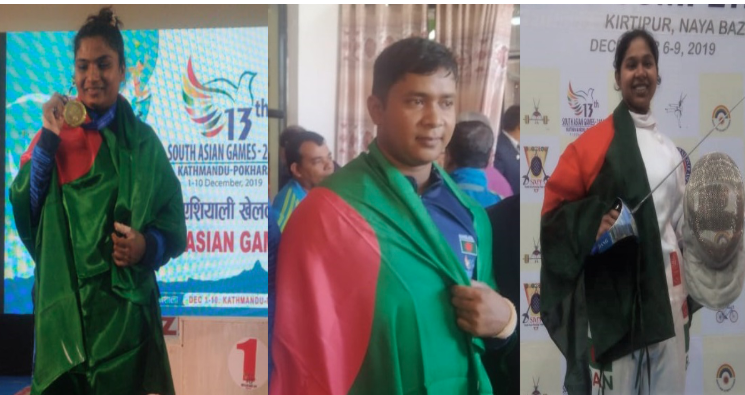 Bangladesh archers brightened their chances to earn more gold medals in the ongoing 13th South Asian Games as they reached the finals of all the 10 events of Archery at Pokhara Stadium in Nepal on Saturday.

In the men’s recurve singles, Bangladeshi celebrated archer Mohammad Ruman Shana reached the final beating Ashim Sherchan of Nepal by 6-0 set points in the quarterfinal and later he beat his compatriot Mohammad Tamimul Islam by 6-2 set points in the semifinal on the day.

Shana will play for the gold against Kinley Tshering of Bhutan in the men’s recurve singles final.

Tamimul beat Lam Dorji of Bhutan by 6-2 set points in the day’s quarterfinal before conceding a 2-6 set points defeat to Shana.

Tamimul will play against De Silva Sajeev of Sri Lanka in the bronze medal deciding match.

Eti will play against Sonam Dema of Bhutan in the final.

In the men’s compound singles, Sohel Rana reached the final beating Sanatah Malla of Nepal by 142-138 scores in their quarterfinal after beating his compatriot Ashim Kumar Das by 145-144 scores in the semifinal.

Sohel will play against Tandin Dorji of Bhutan in the final.

Ashim beat Udaya Perera of Sri Lanka by 145-136 scores in the quarterfinal before conceding 144-145 scores defeat to his compatriot Sohel Rana.

Ashim will play against Kumara of Sri Lanka in the bronze place deciding match.

In the women’s compound singles, Suma Bishwash reached final beating Thakshila Damayanthi of Sri Lanka by 141-137 scores in the semifinal.

Suma will play for the gold against Anuradha Karunarante of Sri Lanka in the final.

Susmita Banik conceded a 140-141 scores defeat to Anuradha Karunarante in their semifinal. Susmita will play against Thakshila Damayanthi in bronze place deciding match.

Bangladesh also reached in final of all the team events. All the teams event final and bronze medal deciding matches will be held on Sunday.

Bangladesh recurve mixed team comprises Mohammad Ruman Shana and Eti Khatun beat Nepal by 6-2 set points in their semifinal. They will play against Bhutan in final.