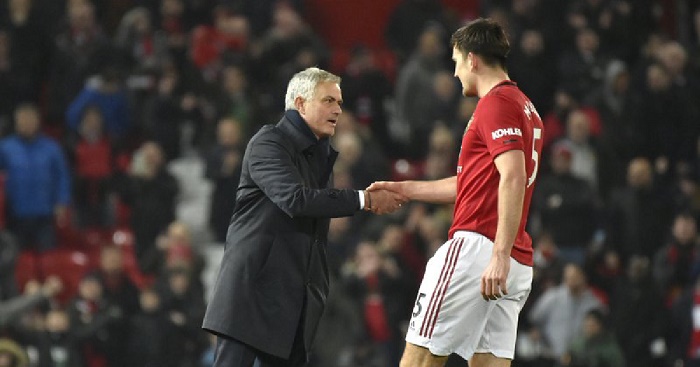 Jose Mourinho was standing on the edge of his technical area near the halfway line when Manchester United midfielder Daniel James came sliding off the field and clattered head-first into the right knee of the Portuguese coach.

Mourinho just about stayed on his feet but grimaced as he clutched his knee before hobbling away.

It was a rough return to Old Trafford for the former United manager on Wednesday.

Two weeks into his time at Tottenham and Mourinho has finally lost a game — and it just had to be against the club that fired him a year ago.

United won 2-1 to end Tottenham's run of three wins since the arrival of Mourinho, with Marcus Rashford scoring both of the home team's goals and celebrating them maybe with a little dig at his old manager.

"Doubters just spur me on," Rashford wrote on Twitter after the match, potentially a reference to Mourinho who, in one standout incident during his time at United, turned his back to Rashford and folded his arms in disgust after the striker missed an easy chance in a Champions League match against Young Boys in November last year. Less than a month later, Mourinho was fired.

Tottenham, which slipped to eighth place and behind United in the standings, has now conceded two goals in each of the four games Mourinho has been in charge — a statistic that must concern a coach who usually sets his teams up to defend resolutely.

The unbeaten leaders netted four goals in the first half and added a fifth late on in a 5-2 thrashing of Everton in the Merseyside derby to stay eight points clear of Leicester, which beat last-place Watford 2-0.

Liverpool scored five in a league game against Everton at home for the first time since 1965, despite leaving out two of the team's formidable attacking trio — Mohamed Salah and Roberto Firmino — as well as captain Jordan Henderson.

Everton couldn't take advantage and slipped into the relegation zone on another dark day for its under-pressure manager Marco Silva, who might not stay in the job after this latest loss given the manner of his team's defending at Anfield.

There were also wins for Chelsea and Wolves — the teams in fourth and fifth place, respectively — while Southampton beat Norwich in a match between relegation contenders.

Jürgen Klopp claimed his 100th Premier League win in style on a night his decision to rotate his team was utterly vindicated.

The first three goals were scored by Divock Origi (2) and Xherdan Shaqiri, the players who replaced Firmino and Salah in the starting lineup.

Sadio Mane added the fourth just before halftime and Georginio Wijnaldum scored the fifth in the 90th minute to pile more pressure on Silva, whose Everton team has lost nine of its 15 league games.

"The type of mistakes we are making is because the players are playing under big pressure because of the position in the table," Silva said. "They are making some mistakes that are not normal for the level we are."

Leicester striker Jamie Vardy scored for the seventh straight game in the Premier League and is closing in on his record of netting in 11 in a row, set in the team's improbable title-winning season in 2015-16.

He set Leicester on its way against Watford by converting a 55th-minute penalty before James Maddison added the second goal in injury time.

With a club record-tying seventh straight league win, Leicester climbed back in front of Manchester City, which briefly moved into second with a 4-1 win at Burnley on Tuesday.

Tammy Abraham scored one goal and set up another for Chelsea in a 2-1 win over Aston Villa on his return to the team after a hip injury.

Without Abraham, Chelsea surprisingly lost 1-0 to home to West Ham at the weekend but it looked a more dangerous team with the England striker.

Having headed Chelsea in front with his 11th goal of the season, Abraham laid the ball off for Mason Mount to power home a finish high into the net from the edge of the area to give the hosts the lead again after Villa equalized through Trezeguet.

Wolverhampton Wanderers consolidated fifth place and extended its unbeaten run in the Premier League to 10 matches with a 2-0 win over West Ham, whose manager Manuel Pellegrini is back under pressure for his job. Leander Dendoncker and Patrick Cutrone were the scorers for Wolves.

Southampton moved out of the relegation zone by beating next-to-last Norwich 2-1. Danny Ings gave Southampton the lead with his eighth goal of the season and Ryan Bertrand also scored before Teemu Pukki's second-half reply for Norwich.