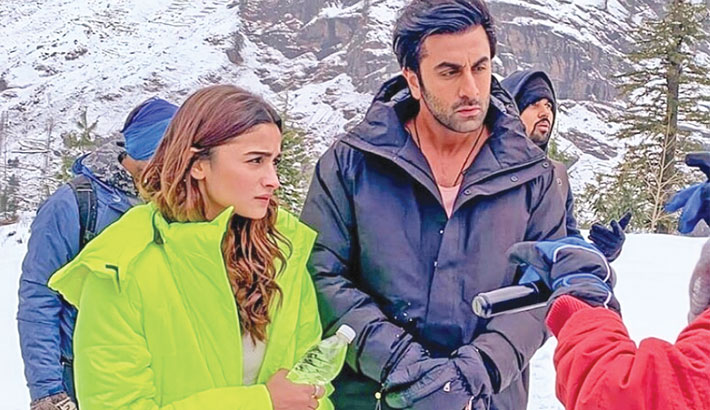 Even though Alia Bhatt and Ranbir Kapoor have their plates full with numerous films lined up, the two are currently enjoying each other's company shooting for Ayan Mukerji's Brahmastra in Himachal Pradesh, reports news18.

The couple was recently seen in Manali along with the rest of the film's cast and crew prepping for a song shoot. Surrounded by blanket of snow, the couple and the crew could be seen dressed in jackets and gloves, to beat the cold. One of the pictures from the sets has attracted the attention of fans as it captures Ranbir and Alia's candid moments where the two are engrossed in a conversation with a third person.

Amitabh Bachchan who will be playing Kapoor's mentor in the film had also shared a picture of himself from Manali clad in a jacket against the cold. The picture had excited the actor's family and fans following his recent health scare due to which he was admitted to the hospital.

Brahmastra also stars Mouni Roy as the antagonist. It was also revealed that Shah Rukh Khan would be making a cameo appearance. Even though Brahmastra is set to be a trilogy there have been claims that SRK's cameo is only restricted to the first film.

Brahmastra was originally set to release on Christmas 2019 but was later pushed for an early 2020 release. Ayan had claimed that the reason for this was that the visual effects team needed more time to prepare the film in a way that fulfilled his vision.