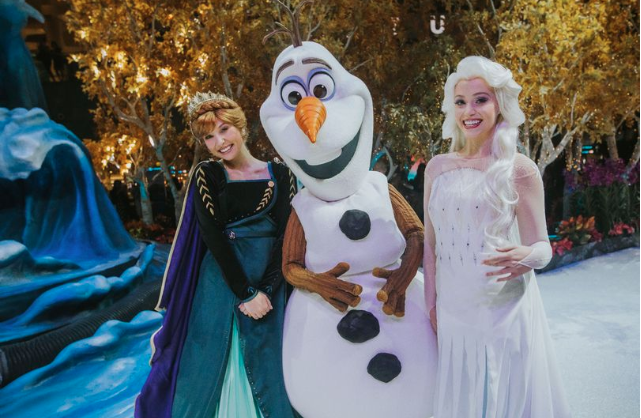 While most airports will spread some festive cheer over Christmas with decorations, one airport has seriously upped the stakes - and it's sure to be a hit with Frozen fans.

Changi Airport in Singapore has transformed its terminals into a Frozen-themed wonderland complete with a snow-covered forest, backdrops from Frozen 2 and even character meet and greets with Anna, Elsa and Olaf.

The new offering will also feature a giant installation in tribute to Olaf which is sure to make for quite the photo opp.

As part of the wonderland, the airport will feature an Enchanted Forest with four 'zones' inspired by earth, wind, fire and water.

Visitors can pass the time waiting for their flight by taking on challenges - complete all four and you'll be treated to an exclusive Disney’s Frozen 2 activity pack, luggage tag, keychain, pens, currency pouch or tote bag.

Frozen fans may actually find themselves hoping their flight is subject to some delays!

Oh, and for travellers looking to pick up last minute gifts, the Disney pop-up stores are sure to be a hit with heaps of plush toys and collectable accessories on sale.

But it's not just Disney magic which will be on offer for passengers.

Other highlights will include a Forest Valley with 'snowfall' for guests to walk through, a festive light and sound show on the airport's Rain Vortex installation, and of course a 16m-tall Christmas tree serving as the central attraction.

A Frozen Wonderland at Changi will be running until the 5th January 2020 so if you are travelling to Singapore, it’s well worth a visit - just remember you’ve still got a flight to catch amidst all of the excitement!

It's not the first time the airport has served up a pretty spectacular offering for passengers over the festive season - last year it transformed its terminal into the Wizarding World of Harry Potter!

Oh, then there's the fact that Changi boasts its own amusement park, Canopy Park, with heaps of fun attractions for kids and parents including mazes, slides, gardens and even an indoor forest.