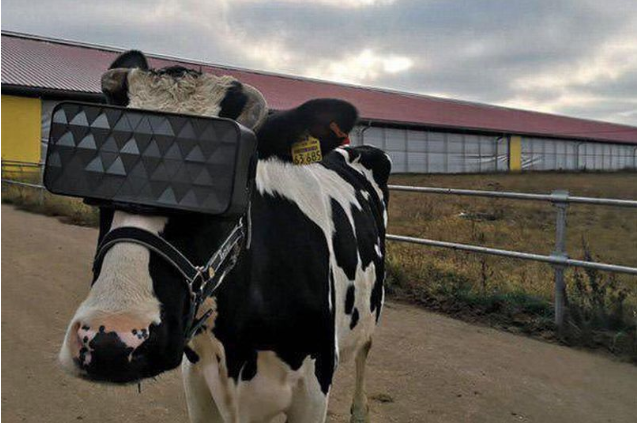 In the hopes of boosting their cows ’ milk production, farmers in Russia have turned to technology, in the form of virtual reality headsets.

The RusMoloko farm, just outside Moscow, has started using VR headsets on its cows, in what’s believed to be a world-first. Announcing the programme, the Moscow agriculture ministry said: “Virtual reality architects created a unique summer field simulation programme based on numerous studies showing that cows are better at perceiving shades of red than green and blue tones on the colour spectrum.”

The headsets show the cows a red-focused colour scheme, mimicking conditions in summer, which are more enjoyable for the cows.

Initial results have shown positive results, according to the Moscow agriculture ministry.

It added: “During the first test, experts recorded a decrease in anxiety and an increase in the overall emotional mood of the herd.

“The impact of VR glasses on milk production will be demonstrated by further comprehensive study.”

YouTuber Jonny Tickle posted a photo of the strange technology on Twitter , and his tweet has garnered a lot of attention.

One user replied: “Why not just treat them nicely, give them more space, surroundings & stop forcing them to produce. I mean, just sayin.”

Another added: “I don’t watch Black Mirror , but from what I hear this would be an episode.”

And one user joked: “Did someone already make the joke about cows watching moo-vies? ... I'll show myself out.”