Speaker for building sustainable, peaceful world based on equality 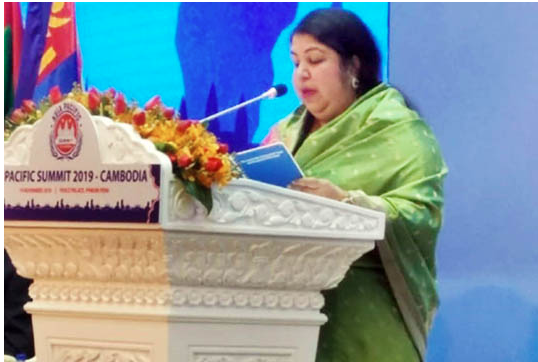 Jatiya Sangsad Speaker Dr Shirin Sharmin Chaudhury  stressed the need for putting united efforts to build a sustainable and peaceful world based on equality by establishing rule of law.

“Climate change, terrorism and refugee issues have now become a globalproblem . . . World people must work unitedly to resolve these burning issues,” she said, speaking at the Asia Pacific Summit-2019 at Phnom Penh, capital of Cambodia.

The Speaker said the Asia Pacific Summit would play a very significant role in attaining common goals of the region.

Dr Chaudhury said the members of parliament (MPs) and political leaders are committed to bring a positive change in this regard, said a parliamentary secretariat statement issued here this evening .

Referring to Bangladesh’s foreign policy “Friendship to all and malice towards none”, she said Father of the Nation Bangabandhu Sheikh Mujibur Rahman believed in resolving all sorts of problems in a peaceful manner.

In her speech, the Speaker highlighted some significant features of the country’s overall development. “In last decade, the poverty rate came down to 21 percent from 40 percent, country’s some 95 percent areas came under the electricity coverage, 5,000 digital labs were set up, 100 specialized economic zone were established and country attained eight percent GDP growth,” she mentioned.

She wished the country, under the charismatic and efficient leadership of Prime Minister Sheikh Hasina, would become a middle-income country by 2021, a developing one by 2024 while a developed and rich state by 2041.

Noting that Bangladesh is putting an optimum contribution to the United Nations (UN) Peacekeeping Mission, the Speaker sought necessary cooperation of regional and international communities for Rohingyas safe and dignified repatriation to their Rakhine state homeland.

“Democracy is usually getting established considering some difficult problems, including disparity, discrimination, unemployment and poverty.
Besides, women empowerment and creation of jobs for them also accelerate the advancement of a country,” she added.