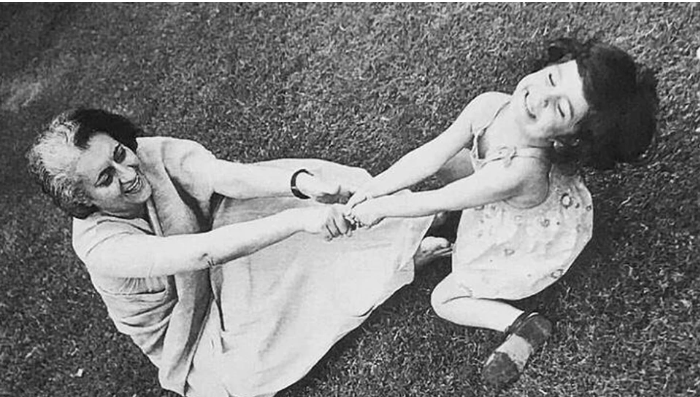 On Indian late prime minister Indira Gandhi’s 102nd birth anniversary, granddaughter Priyanka Gandhi Vadra on Tuesday dedicated a poem in the memory of the “bravest woman” she has known.

The poem by the Victorian era English poet William Ernest Henley focuses on the human spirit and its ability to overcome adversity.

“In the fell clutch of circumstance I have not winced nor cried aloud. Under the bludgeonings of chance. My head is bloody, but unbowed,” Priyanka wrote quoting the English poet.

The Congress leader also wrote saying: “In memory of the bravest woman I have known. #IndiraGandhi.”

Priyanka also shared a black and white image of Indira Gandhi playing with her. In the image, the two can be seen sitting on ground with young Priyanka’s head thrown back in laughter and the grandmother, who is laughing as well, is holding her hand.

“On her birth anniversary, we pay homage to India’s first female Prime Minister, the Late Smt Indira Gandhi. Her will and determination led our country to great heights. Her contributions to India’s national security, economy & foreign policy will always be cherished,” the Congress tweeted.

Born on November 19, 1917, to India’s first Prime Minister Pandit Jawaharlal Nehru and Kamala Nehru, she served as the first and only woman prime minister from January 1966 to March 1977 and again from January 1980 until her assassination in October 1984.

Indira Gandhi, who was hailed as one of the tallest world leaders, was assassinated by her own Sikh bodyguards at her residence on Akbar Road on October 31, 1984. This came after Operation Bluestar was executed at Amritsar’s Golden Temple, wherein Gandhi ordered the Indian Army to confront Sikh separatists who had taken shelter at the holy shrine.