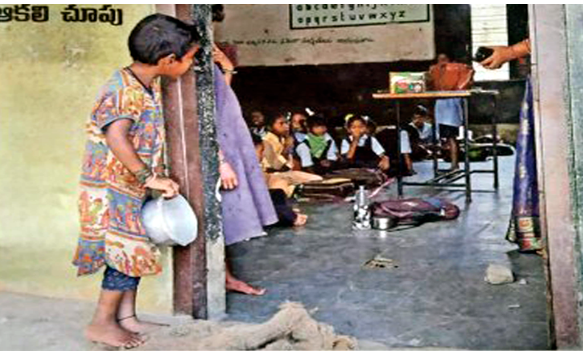 Every day Mothi Divya, a young girl, would stand outside the classroom of Deval Jham Singh Government High School in her neighborhood in Gudimalkapur, Hyderabad of India with an aluminium container, and wait for the leftover food from the midday meals provided by the government.

A photograph of her waiting outside the classroom went viral and miraculously fetched her the right to education when the picture was spotted by an NGO official. And then of course, there was the Internet.

The photograph clicked by Avula Srinivas was first published in a Telegu daily, Eenadu with the title 'Aakali Choopu', which in English means a 'hungry look'.

The picture described that the slum girl would wait for the break hours to hit, hoping to get the rest of the food.

The photograph soon became viral on the Internet and was eventually shared by Venkat Reddy, National Convenor at the Mamidipudi Venkatarangaiya Foundation (MV Foundation). The organisation works for the rights of a girl child.

Reddy took to Facebook and said it was a "shame" that the girl couldn’t exercise her right to education and food.

According to reports, Reddy immediately took to action and got in touch with volunteers and community workers who traced the girl and their family. This is when MVF learnt that Divya’s parents Laxman and Yashoda are garbage collectors and that she was not enrolled in any school.

In another post, Reddy posted a picture of Divya dressed in her new school uniform and standing with her parents.

This time Reddy said, "Divya exercised her constitutional right to be in school. Today our team and other community members admitted her in the same school where she was waiting for lunch bell to eat her food.....Congratulations team. Congratulations Divya.