Where a rickety bamboo footbridge is the only hope 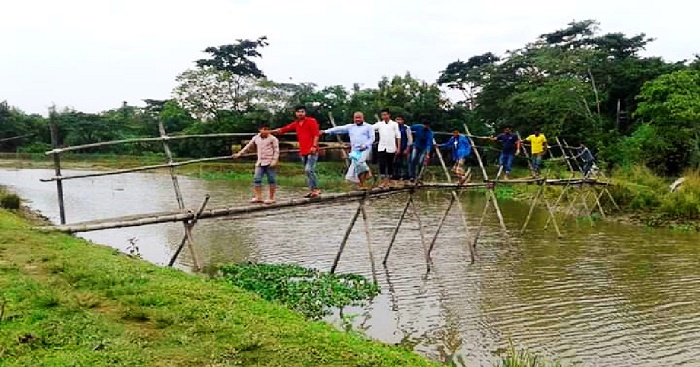 Residents of 10 villages of Lamakazi Union under Biswanath upazila are dependent on a single bamboo footbridge over the Kessha River for road communication.

Communication becomes more difficult during the rainy season when the river rises. People, especially school goers and the elderly, are the worst sufferers.

Kamal Uddin and Babul Mia, both farmers from the area, said the upazila sadar is about 10 kilometres from Lamakazi but the lack of a proper bridge over the river makes road communication hard.

“Only a bridge is holding us back,” Babul said. “The area has hardly been developed since independence.”

Kabir Hossain Dhala Mia, chairman of Lamakazi union parishad, said the residents of the area are deprived of development.

“I’m trying my best to improve the communication system. The people of this region will be greatly benefitted if a bridge is constructed over this river,” he said.