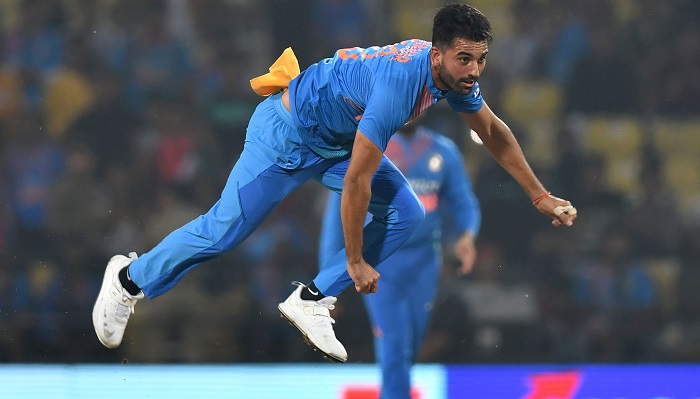 Deepak Chahar etched his name into the record book by recording the best bowling figure in T20 International cricket as he claimed 6 wickets for 7 including a hat-trick to help India romp to a 30-run victory over Bangladesh in series deciding the third match at Vidarbha Cricket Association Stadium in Nagpur on Sunday.

The much-needed victory gave India the three-match series by 2-1.

Fast bowler Chahar eclipsed the feat of Sri Lanka spinner Ajantha Mendis (6-8 against Zimbabwe at Hambantota, 2012) to rewrite the record in a match that India badly needed to win to keep their record of not losing three-match T20 series at home soil.

Chahar’s hat-trick came across two overs as he removed Shafiul Islam in the last ball of the penultimate over before dismissing Mustafizur Rahman and Aminul Islam Biplob in the first two balls of the last over.  He finished with an excellent figure of 3.2-0-7-6 as Bangladesh was bowled out for 144 in 19.2 overs after India compiled a hefty 174-5 in the series deciding match.

Bangladesh won the first match by seven wickets before India clawed back into the series with eight-wicket victory.

Chahar’s feat put a shed on Mohammad Naim Sheikh’s sublime 48 ball-81, studded by 10 fours and two sixes. Playing only his third match, the young gun, picked up his maiden half-century and almost drove the side home before Shivam Dube struck at the crucial phase to leave Bangladesh in limbo.

Varying his pace in an intriguing way, Chahar who outfoxed Bangladeshi batsmen, however, gave India a good start, claiming the wicket of Liton Das (9) and Soumya Sarkar (0) in consecutive deliveries.

As it looked Bangladesh would crumble under pressure in a crucial game, Naim Sheikh and Mohammad Mithun kept the side in the hunt, sharing 98-run partnership for the third wicket as Bangladesh looked all set to win the game.

Chahar then came again and broke the partnership by removing Mithun for 27.

Dube, who leaked runs in abundance in his first spell, came up with fire in the second spell, taking out Mushfiqur Rahim for naught and Naim Sheikh in consecutive overs.

Bangladesh who sensed a historical victory suddenly found them invulnerable state, losing five wickets for 20 runs to be reduced to 130-7 from 110-2.

Chahar then completed his hat-trick, which was 12th in T20 cricket and became the third bowler to slam hat-trick against Bangladesh.

Rohit Sharma also showed how shrewd he is as a captain as he used his spinners early so that the dew couldn’t make any impact in the game.

Chahar’s six-for was complemented by Shivam Dube’s 3-30 while Yuzvendra Chahal got the rest of the wicket.

But the visitors also had to blame themselves in the match in which they stood on a good chance to chase India’s total, specially when India’s bowlers got it tougher to grip the ball due to excessive dew in the ground.

Basically the dew factor prompted Mahmudullah Riyad to opt for bowling but they made several blunders in bowling and dropped some crucial catch including India’s highest scorer Shreyas Iyer.

Iyer got a life before opening his account and made Bangladesh paying heavily for it to blast a 33 ball-62, with three fours and five sixes, three of which came in a row in the bowling against Afif Hossain.

Lokesh Rahul also contributed in the team’s cause with well-composed 35 ball-52.

The Tigers made a good start when Shafiul Islam removed dangerman Rohit Sharma in just second over, clattering his wicket for 2.

Rahul didn’t let the pressure to grapple them, playing with utmost confidence but Bangladesh took them on top when Shafiul struck again to take the wicket of Shikhar Dhawan for 19.

With India reeling to 35-2 in just sixth over, Bangladesh could make three down had Aminul Islam Biplob not dropped a sitter offered by Iyer at backward point off the bowling of Shafiul.

Iyer remained restrained afterward, while Rahul played the anchor role, taking Bangladesh’s bowling in disdain. After hitting seven fours in his 35 ball-52 knocks, he was finally undone by a superb slower of Al-Amin Hossain who bowled with heart throughout the match.

Iyer then took the onus to drive the side. As India looked set for 200, Soumya Sarkar did the amazing thing and indeed saved the side from the ultimate blushes, taking out Rishab Pant and Iyer in the same over. In between, Bangladesh fielders dropped several catches to allow India batsmen to settle in the crease nicely.

Manish Pandey accelerated the score towards the end by hitting an unbeaten 13 ball-22.

Shaiful and Soumya grabbed two wickets apiece but it was Al-Amin Hossain who came up with measly bowling effort, 4-0-22-1, to tie down the mighty Indian batting line-up.