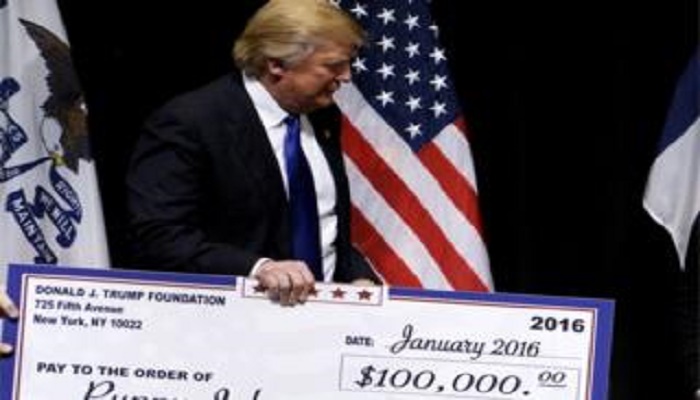 A New York judge has ordered President Donald Trump to pay $2m (£1.6m) for misusing funds from his charity to finance his 2016 political campaign.

The Donald J Trump Foundation closed down in 2018. Prosecutors had accused it of working as "little more than a chequebook" for Mr Trump's interests, reports BBC.

Charities such as the one Mr Trump and his three eldest children headed cannot engage in politics, the judge ruled.

Mr Trump hit out at the ruling, saying "every penny" went to charity.

"I am the only person I know, perhaps the only person in history, who can give major money to charity ($19m), charge no expense, and be attacked by the political hacks in New York State," he wrote in a statement posted to Twitter.

Mr Trump said the case had been resolved and that he was "happy to donate" $2m to the Army Emergency Relief, Children's Aid Society, City Meals-on-Wheels, Give an Hour, Martha's Table, United Negro College Fund, United Way of Capital Area and the US Holocaust Memorial Museum.