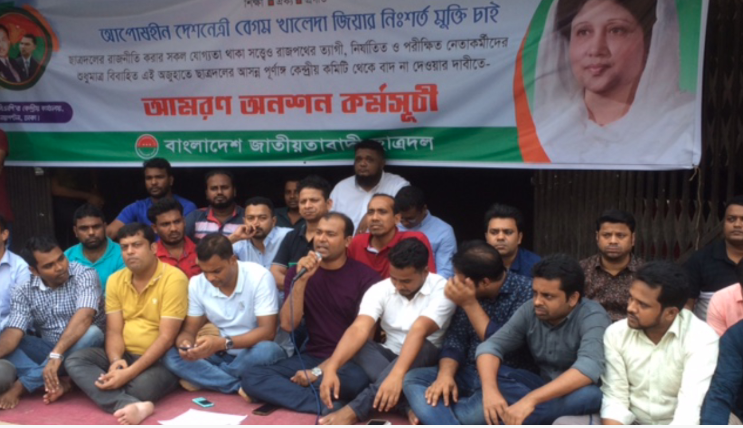 A group of leaders of BNP’s student wing Jatiyatabadi Chhatra Dal (JCD), who have been made disqualified from getting any post in its new committee for being married, went on a fast unto death on Wednesday demanding that they be included in the committee.

Around 30 former JCD leaders took position in front of BNP’s Nayapaltan central office around 11am and began the hunger strike to press for their demand.

Taking to reporters, previous JCD committee’s school affairs secretary Arafat Billah Khan said they had many contributions to their organisation and it is not justified to drop them from the party for being married.

He said they want the BNP high command to evaluate their contributions to the JCD and induct them into the new committee of the organisation.

Arafat said they will not accept the new committee if it is formed dropping them only for their marital status.

Another former JCD leader of Dhaka University unit Mujahidur Rahman said they deserve to get posts in the new committee as they have long been actively working for the organisation.

He said they will peacefully continue their movement until their demand is met.

Mujahid said they talked to JCD’s newly elected president and general secretary about the issue who assured them of taking steps in this regard through discussions with the senior leaders.

JCD's last committee was formed on October 14, 2014, with Rajib Ahsan as its president and Akramul Hasan as general secretary. It was dissolved on June 3 last.

On September 19, Fazlur Rahman Khokon and Iqbal Hossain Shyamol were elected president and general secretary respectively of the JCD through voting.

It was the first time in 27 years that the JCD held direct voting to elect its leadership.

Ruhul Kabir Rizvi and M Ilias Ali were elected president and general secretary respectively of JCD through the last direct voting in 1992.

The new president and general secretary are supposed to form the full-fledged committee soon.