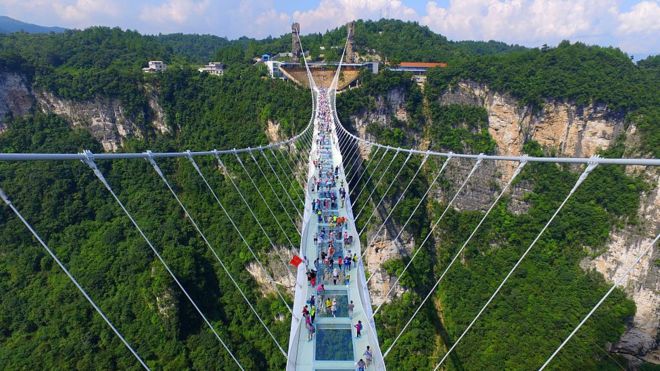 A Chinese province has shut all 32 of its glass attractions - including bridges, walkways and viewing decks - as safety checks are carried out.

The attractions, spread across 24 sites in Hebei province, have been shut since March 2018, said state media CCTV.

The move had not previously been widely reported.

China has seen a flurry of glass attractions spring up across the country - but there have been accidents and at least two deaths.

There are an estimated 2,300 glass bridges in China. According to state media outlet ECNS, there are also an "undetermined number of glass walkways or slides".

The glass attractions are an attempt to attract thrill-seeking tourists and capitalise on China's growing domestic tourism.

The Zhangjiajie bridge in Hunan province - which was the highest and longest glass-bottomed bridge in the world when it opened in 2016 - arguably kicked off the craze.

But earlier this year, one tourist died and six others were injured after they fell off a glass slide in Guangxi province.

Rain had made the glass extra slippery, causing the man to crash through the guardrail, and fly off the slide. He died from severe head injuries.

The closures have not just affected Hebei province - across the country, a number have been shut.

Earlier this year, the government called for local tourism authorities to carry out "comprehensive safety assessments" of glass bridge projects.

On social media site Weibo, many applauded the closures, with one saying it was "about time safety was addressed".

Others criticised the sheer number of glass bridges built over the past few years.

"I don't really understand why there are so many glass bridges recently. It's a waste of money," said one commenter.

The death in Guangxi province was not the only glass attraction fatality. In 2017, a tourist died after an accident on a glass slide in Hubei.

And in 2016, someone was injured after being hit by falling rocks while walking on a glass walkway in the city of Zhangjiajie.

In 2015, a glass skywalk in Henan province cracked despite being open for only two weeks, sending tourists fleeing.