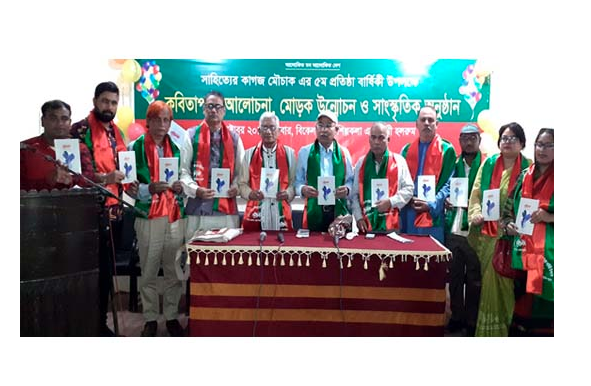 Socio-cultural and literary personalities at a discussion called upon all to nurture Bengali literature and culture for building a healthy society through preventing drug abuse, militancy and terrorism.

They expressed the views at the discussion arranged by ‘Mouchak Family’ at Shilpokola Academy auditorium this afternoon to celebrate the fifth founding anniversary of the tri-monthly literature newspaper ‘Mouchak’.

The tri-monthly literature newspaper ‘Mouchak’ is being published and edited by poet Rezaul Karim Jiban from Rangpur city since 2014.

In the beginning, rich tribute was paid to Father of the Nation Bangabandhu Sheikh Mujibur Rahman, martyrs of the Language Movement in 1952 and War of Liberation in 1971 and former Adviser of ‘Mouchak’ and rhyme composer Rakibul Hasan Bulbul.

Later, Chief Adviser of the ‘Mouchak’ Rezaul Karim Mukul inaugurated the observance amid singing of the National Anthem and theme song of ‘Mouchak.’

Editor of ‘Mouchak’ and poet Rezaul Karim Jiban delivered a welcome speech in the inaugural function presided over by its Adviser Aleya Khatun Lovely.

Rezaul Karim Mukul with other guests unveiled cover of the thirteenth edition of the ‘Mouchak’ followed by discussion, recitation of poems, rendering songs and dance, staging of drama and cultural function.

Biplob Prasad laid emphasis on nurturing of healthier Bengali culture and literature at socio-cultural organisations and educational institutions to build a healthier society free from drug, militancy and terrorism.

“The literary personalities should write time-befitting novels, drama, essays, poems and rhymes to create a social renaissance for strengthening the cultural movement to build a peaceful society,” he said.

Freedom fighter Akbor Hossain urged literary personalities to make the younger generations aware of the communal forces through their writings to establish true spirit of the War of Liberation on this soil.