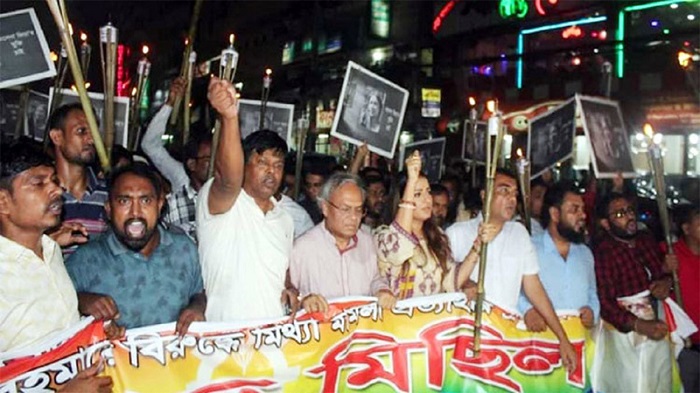 BNP brought out a torch procession in the city’s Elephant Road area on Tuesday evening demanding the release of its chairperson Khaleda Zia.

In a brief address before the procession, Rizvi said they have brought out the procession seeking their chairperson’s release from jail. “The current illegal government has unfairly kept Khaleda Zia in jail. They not only imprisoned a leader but also democracy.”

He said democracy and people’s rights will be ‘restored’ in the country with the release of Khaleda Zia. “We demand the government immediately free our leader (Khaleda) from jail.”

On October 14, the party brought out a similar procession in the city’s Nayapaltan area to press home their demand for the release of the BNP chief.

Khaleda has been in jail since she was convicted in Zia Orphanage Trust corruption case in February 8, 2018. She was found guilty in another corruption case later the same year, though her party claims both the cases are ‘politically motivated’.