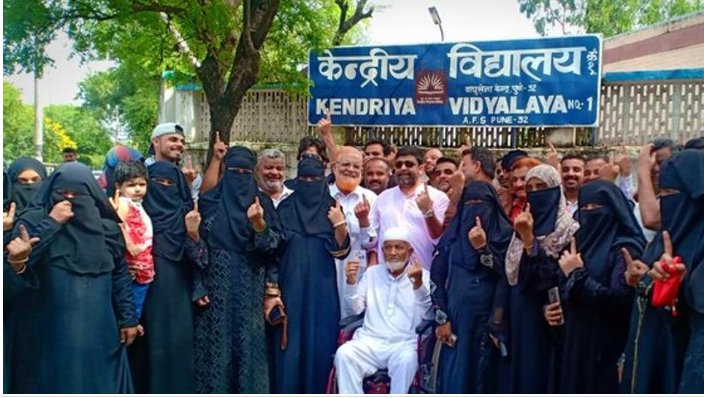 In probably a record, a 102-year-old retired British Indian Army officer voted in the Vadgaon-Sheri constituency on Monday - along with 270 members of his clan, spanning five generations - in the Maharashtra Assembly elections.

The venerable head of the family is Haji Ibrahim Alim Joad, born in 1918, pushing 102 now and still going strong. He was accompanied by 10 of his 12 sons, two daughters, 45 grandchildren, many great-grandchildren, and even a few young great-great-grandchildren, said one of his third-generation grandsons, 45-year Tanveer Joad, who is engaged in the family business of civil works contracts.

Haji Ibrahim Joad, who spent the past four days in the Jehangir Hospital for a minor heart ailment, was declared “hale and hearty” by his doctors and discharged this afternoon.

Anxious to cast his vote and ensure all his family members also complied, he sent out “a word” to all to assemble outside the hospital or at their respective polling stations in the constituency, Tanveer Joad told IANS.

Taking his word as a “command”, the entire family dropped everything and armed with their relevant election documents, landed up at the designated spot to adhere to the family patriarch’s wish. Haji Joad reached there around 2 p.m. on a wheelchair, feeble but cheerful and feeling duty-bound for the nation.

In fact, prior to his discharge, he had issued a recorded video appeal to the people to ensure that they came out to exercise their franchise for the elections, said Tanveer Joad.

“All the 270 people who are voters in the family, have voted today, including 72 joining with my grandfather at one polling station... the rest cast their votes in neighbourhood polling stations,” added an excited Tanveer Joad.

A beaming Haji Joad told media persons outside the polling station that he has voted in every single election - civic, assembly and parliament, seen many governments come and go, and exhorted all the people to “vote without fail” as a duty and responsibility to the nation.

The centenarian, originally hailing from Rajasthan, had moved to Maharashtra in 1942 for business purposes.

“He served three years in the British Indian Army till 1945, and after Independence he decided to make Pune his permanent home. He was engaged in his civil works business, which has now become ‘Joad Constructions’ which undertakes all kinds of civil works,” said Tanveer Joad.

The senior Joad has performed the Haj pilgrimage thrice in his life along with other family members but lost his wife a few years ago.

“Till the age of 90, he used to cycle daily 12 kms, going to his favourite tea-shop around 3 km away, return home, again undertake the same trip in the evening, for having tea-snacks with friends. He stopped his daily ‘long-cycling’ 12 years ago due to some knee issues, but remains very healthy, still walks around a lot daily... independently,” Tanveer Joad said.

The family’s construction business is centred in Vadgaon-Sheri, the upcoming business-IT hub on the outskirts of the city, barely five kms from the Pune Airport.