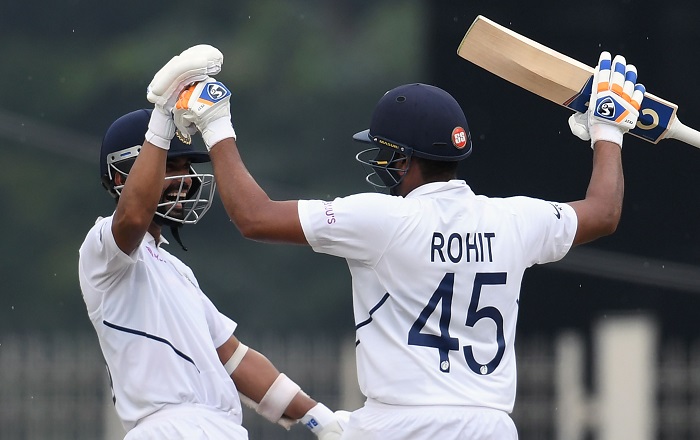 Rohit Sharma (R) celebrates his century (100 runs) with teammate Ajinkya Rahane during the first day of the third and final Test match between India and South Africa at the Jharkhand State Cricket Association (JSCA) stadium in Ranchi on October 19, 2019. –AFP

But can he do it against the red ball in Test cricket? He can.

Rohit Sharma raced to his sixth Test hundred in Pune, also his third this series, to help India to 205 for 3 at Tea on Day 1.

The hosts added 134 runs without losing a wicket in the session -- a testament to South Africa's falling fight with the ball in hand on Saturday.

Kagiso Rabada and George Linde started the session with the ball, the former conceding as many as six boundaries in his first two overs. Five of them were off Ajinkya Rahane's bat, and not all of them were off the middle, but what it did is ease India into an unbeaten fourth-wicket stand of 166 off 220 balls.

That South Africa bled runs was also down to the attacking fields they set but none of that mattered when Rohit's outside edge ran through the vacant third slip region in Rabada's second over of the session. Rohit was on 43 then.

And there was no stopping him after that. After having survived through the tough early hours, making his first seven runs off 33 balls, and the next 45 runs came off only 53 balls. There was much more on display after the half-century. A backfoot punch off Anrich Nortje, a slap-drive off Lungi Ngidi and three sixes against Dane Piedt. The third one delivered him to his hundred, coming right when the groundsmen were ready to bring the covers on.

76 runs came in the first hour, and 58 in the second as India kept the pressure on, finding gaps and leaving Faf du Plessis with much to answer in the final session of the day. Can he do it on a dry track against Rohit Sharma?