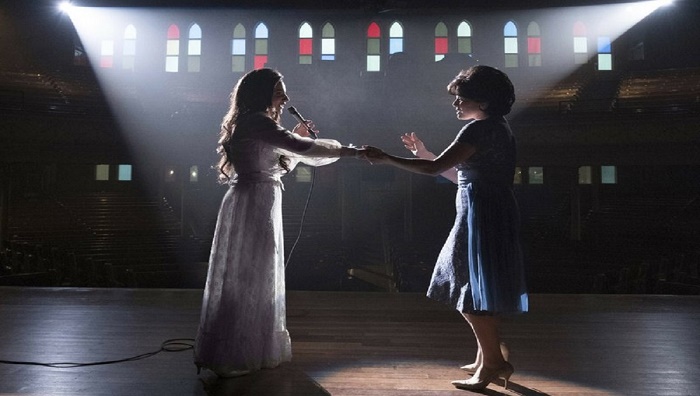 Writer-director Callie Khouri is drawn to stories about female friendships and country music, and her latest television film "Patsy and Loretta" combines those passions into the true story of a friendship between two of country music's most powerful voices.

The biopic about Patsy Cline and Loretta Lynn, which airs Oct. 19 on Lifetime, centers on their friendship, which has often been underexplored in country music history, at a time when the two pioneering women's careers overlapped in the early '60s.

Khouri, who wrote the classic female adventure film "Thelma and Louise" and brought her country music drama "Nashville" to primetime television, said even she was surprised to find out that the two singers had a close friendship when her stepdaughter brought her the script.

"I was just blown away because it was a time before we really knew much about any of the women in country music," said Khouri. "I loved both of the artists of course and the fact that they had this really incredible bond."

In the film, Cline is at the peak of her career with hits like "Walking After Midnight" and "I Fall to Pieces," while Lynn is a young singer-songwriter from Kentucky just getting her footing in Nashville.

Their styles were different, with Cline's powerful, almost theatrical voice made her one of country's first crossover artists, while Lynn penned songs about rural life and honky-tonk women. But both were dealing with industry demands on how they looked and sang, juggling being mothers with their careers and clashing with husbands that liked to fight and drink.

Hilty, who is known for her Broadway roles in "Wicked" and "9 to 5" and the TV series "Smash," delved deep into Cline's recordings and videos of her performing and read letters written by Cline to family and friends.

"To play an icon of this magnitude is extremely daunting," Hilty said. "But she's a fascinating person. I'm absolutely obsessed and in love with her."

Jessie Mueller, who won a Tony Award for her role as Carole King in the Broadway musical "Beautiful," also had the challenge of capturing Lynn's well-known Appalachian accent and phrasing.

"There's dialect work. There's guitar work. It's a lot to try to encompass the essence of someone like Loretta Lynn," Mueller said.

The film was shot in Nashville, including at the historic Ryman Auditorium, where both singers have performed and the former home of the Grand Ole Opry. Khouri knows the theater intimately having shot a lot of scenes from "Nashville" there.

"Every time I come here I feel all the history, all the music that's been played. And you know, it doesn't feel like there's ghosts, but it feels very present to me. I just imagine Patsy on the stage and Bill Monroe and Hank Williams," Khouri said.

Cline died in a plane crash in 1963 at the age of 30, ending a career far too early, while Lynn is now 87 and has stopped touring after suffering a stroke in 2017, although she continues to put out new records. But their legacies as progressive and influential voices in a male dominated industry has continued to impact today's artists, said Mueller.

"I just get the feeling that, God bless them, they didn't know what they were doing for all the generations to come," Mueller said. "They were just trying to make it happen and they were just doing their thing, but they were really laying the groundwork for so many amazing women artists that came after them."