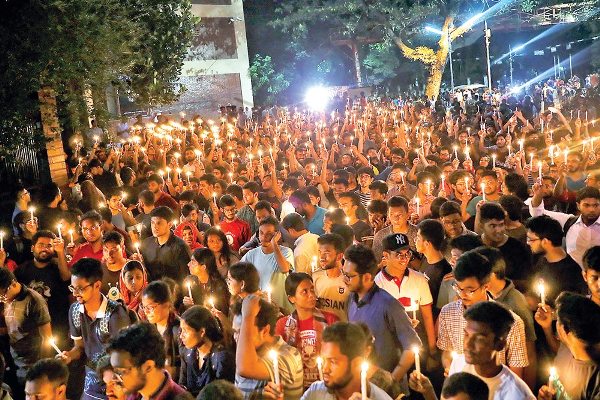 Imposing a ban on student politics at educational institutions may fuel radicalisation, leading to a further rise of evil forces in the country, analysts said.

Political analysts as well as student leaders fear that such a restriction on student politics will help increase evil forces, which try to catch fish in troubled waters.

Talking to the daily sun, they made the remarks after the BUET authorities on October 11 announced a ban on student politics on their campus following a brutal murder of student Abrar Fahad.

Abrar was beaten to death by some BCL men following his Facebook post protesting against some deals between Bangladesh and India and his links with Jamaat-Shibir.

Jamaat, which runs politics based on religion, opposed the country’s war of independence in 1971.

Former student leaders fear that the decision to ban student politics on the BUET campus may invite radicalisation.

But, it is reported that some students have been arrested in connection with the acts of militancy.

They say that such a decision may help Shibir, a student wing of Jamaat-e-Islami, run their activities in the name of inviting students for prayers.

This will create a big gap between the progressive forces and religion based parties.

Former Vice-Chancellor of Dhaka University AAMS Arefin Siddique feared that activities of Shibir and radical forces may increase on the campus with the ban of student politics of pro-liberation parties.

“If the politics of pro-liberation parties stops on the campus, there is a chance of a rise of Shibir and other radical groups,” he told daily sun.

Mentioning the Abrar murder not a part of student politics, she said the real reason behind the murder needs to be unearthed.

Student politics cannot be prohibited following a single incident. If Buet thinks, it can ban (student politics). We won’t interfere,” she said.

Opposition BNP has also raised voice against the ban on student politics.

“The student community has been standing against unfairness, injustice and inequality in society for ages. They sacrificed blood by joining the Language Movement, Liberation War and other democratic movements,” he said.

Rashed Khan Menon, who led Students’ Union during the Pakistani regime, also raised voice against the ban on student politics at a programme in Chattogram.

“Politics of murder must be stopped at educational institutions. But, it doesn’t mean that student politics should be banned. Amir Hossain Amu, Tofail Ahmed, our Prime Minister Sheikh Hasina, and I – we all had done student politics,” he said.

CPB President Mujahidul Islam Selim, who was the first VP of Dhaka University Central Students’ Union, believes that the Abrar killing took place due to absence of student politics.