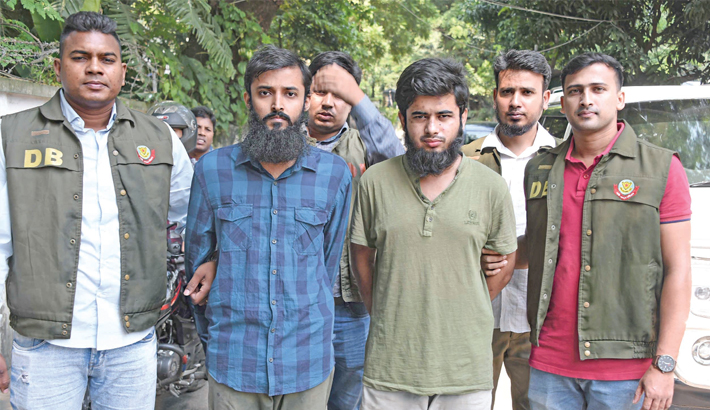 Policemen are now the main targets for militant attacks as homegrown militants are trying to attract global attention, police said.

The two militants – Mehedi Hasan Tamim and Abdullah Azmir – gave their confessional statements to the police after they were arrested from Mohammadpur in the city on Sunday night.

The Counter-Terrorism and Transnational Crime (CTTC) unit of police arrested the duo for their involvement in the recent bomb attacks on policemen in the capital.

JMB militants recently launched bomb attacks on policemen in Gulistan and Science Lab areas in the capital to catch attention of foreign militants.

CTTC chief Monirul Islam disclosed the information at a news briefing at the DMP media centre on Monday.

Mehedi and Abdullah studied Mechanical Engineering at Khulna University of Engineering and Technology (KUET) where they got involved with JMB.

They received training in remote areas of Bhola in February last, Monirul said.

The militant duo joined the JMB armed unit in September this year under the leadership of Jamal Uddin Rafiq, younger brother of Fariduddin Rumi, who was arrested from Narayanganj recently.

The militants set up a bomb factory at Rafiq’s house in Fatullah of Narayanganj, he added. Mehedi and Abdullah admitted to being directly involved in Gulistan attack on April 29 and Science Lab attack on August 31, the police officer said.

“They were involved in the blasts targeting police in Gulistan and Science Lab areas,” he further said.

Two traffic policemen and an Ansar member were injured when a cocktail bomb went off in front of a shopping complex on the south side of Gulistan underpass on April 29.  On August 31, another bomb exploded near LGRD Minister Tazul Islam’s car at the Science Laboratory intersection, injuring two policemen.

The IS, based in the Middle East, claimed the responsibility for the attacks in Dhaka. But police dismissed their claims and put the blame on local extremist groups.

Sources at the Police Headquarters say at least 27 law enforcers were killed and over 250 wounded in separate militant attacks and political violence in the country in the last five years. Gulshan Holy artisan restaurant and Sholakia Eidgah attacks are among them.

On July 7 in 2016, a band of suspected Islamic extremists, armed with guns, bombs and machetes attacked policemen guarding Bangladesh’s largest Muslim gatherings at Sholakia Eidgah in Kishoreganj, killing two police officers and a woman. The attack, in which one assailant was killed, came just six days after a militant assault claimed by Islamic State killed 20 foreign citizens and two police officers in a restaurant in Dhaka.

The attack was carried out by home militants attempting to topple the government and establish strict Islamic law in the country.

Law enforcers have recently conducted massive operations across the country to uproot militants.

Inspector General of Police Dr Mohammad Javed Patwary said that security measures have been intensified countrywide as the police force is under the target of militants.

“Militant activities are under control in our country, but it hasn’t been possible to uproot completely,” he said.

However, the IS isn’t active in Bangladesh, he added.