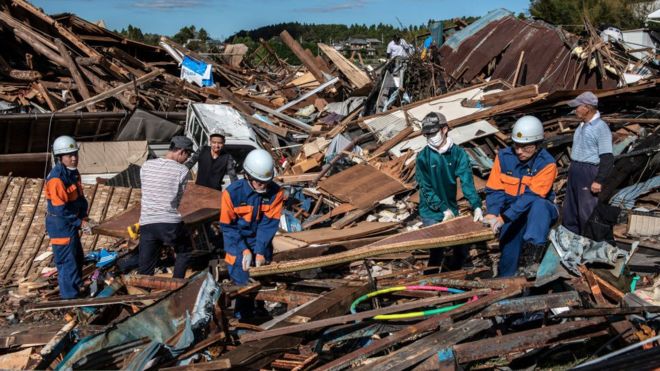 More than 110,000 people are taking part in search and rescue operations after Typhoon Hagibis struck Japan on Saturday.

The typhoon - the worst storm to hit the country in decades - has left at least 37 dead, with 20 missing.

Typhoon Hagibis also caused the cancellation of three Rugby World Cup matches but the key match between Japan and Scotland went ahead.

Japan won 28-21 to reach the quarter-finals for the first time.

"Everyone who is suffering with the typhoon, this game was all for you guys. The crowd was massive for us, and today was more than just a game," he said.

The typhoon has weakened and moved away from land but has left a trail of destruction.

Thousands of police officers, fire fighters, coast guard, and military are working to reach those trapped by landslides and floods.

The typhoon battered into eight prefectures across Japan, with wind speeds of up to 225km/h (140mph).

In the central prefecture of Nagano, group of rescuers wearing snorkels and goggles began searching for survivors in waist-high water.

A train depot in Nagano was also flooded, causing 10 high speed ("bullet") trains to be submerged. Each train has been valued at $30m (£23m).

The Prime Minister's Office of Japan said the rescuers would focus on "houses isolated by floods... and search for those unaccounted for".

The Prime Minister's Office of Japan said the rescuers would focus on "houses isolated by floods... and search for those unaccounted for".

More than seven million people were urged to leave their homes at the peak of the storm, but it is thought only 50,000 stayed in shelters.

The capital Tokyo was left relatively unscathed but other cities and towns across the country were inundated by water.

More than 1m (3ft) of rain fell in the town of Hakone, the highest total ever recorded in Japan over 48 hours.

It was only last month that Typhoon Faxai wreaked havoc on parts of Japan, damaging 30,000 homes, most of which have not yet been repaired.