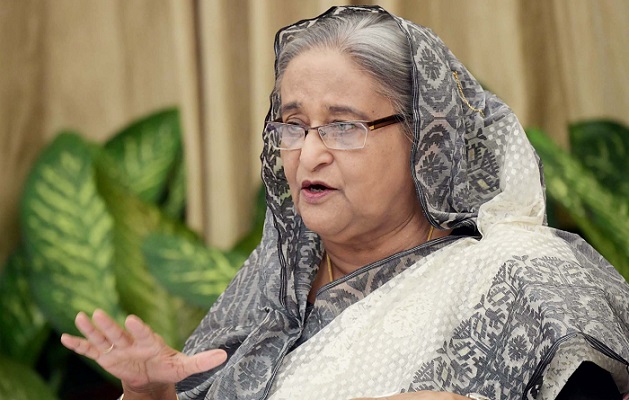 Asserting that the Awami League government always protects the country’s interest, Prime Minister Sheikh Hasina on Wednesday said the amount of water India will get from the Feni river is insignificant and only for the drinking purpose.

“We always protect our interest in all fields… the area of the river (Feni) from where India would take water is a catchment area and that belongs to Bangladesh. That is why we signed an MoU with India,” she said.

The Prime Minister was responding to a volley of questions at a press conference at her official Ganabhaban residence on her recent participation in the 74th session of the United Nations General Assembly and her recent visit to India.

She said her government has already discussed with India at the Joint River Commission the water sharing of the Monu, Mohuri, Khowai, Gomuti, Dharla and Dudhkumar Rivers and steps are being taken to resolve those soon.

“Besides, a discussion is on over the water sharing of the Teesta River,” she said.

Mentioning that the source of the River Feni is Khagrachhari and about 94 kilometers of this river is along the border with India, Sheikh Hasina said scarcity of drinking water is acute in Sabroom town of Tripura and the MoU with India was signed to give them 1.82 cusec water.

“Whatever water we’ll give to India is very insignificant and we’ll use most of the water of this big river,” she said adding, “If anyone seeks water for drinking purpose and if we don’t give, it doesn’t look good.”

Taking a swipe at the criticism of BNP leaders over the deal of Feni River, the Awami League President alleged that Ziaur Rahman and Khaleda Zia during their tours to India could not strike any deal over the water sharing of the River Ganges. “Khaleda Zia said she forgot to raise the issue of Ganges water sharing during her visit to India when media asked her after her return,” she said.

Sheikh Hasina went on saying, “How could that party (BNP) talk about the issue of Feni River when they forgot to protect the country’s interest and realize the just demand of water of a big river like the Ganges?”

The Prime Minister alleged that after the assassination of Father of the Nation Bangabandhu Sheikh Mujibur Rahman with most of his family members in 1975, the subsequent governments could not resolve ratification of the Land Boundary Agreement issue and failed to gain the vast maritime areas in the sea. “Those who were in power from 1975 to 1996 did not have the courage to raise such issues with India. But, it was Awami League which initiated work again in 1996 to resolve these issues,” she said.

Turning to the recent deal for exporting LPG to India, the Prime Minister said she can never ever compromise on the interest of the country and everyone should know it.

“We always consider our country’s interest first and there is nothing to raise a question over this. We import LPG in bulk, then we bottle it and supply throughout the country according to our demand. We’ll export part of the excess LPG to Tripura of India,” she said.

Sheikh Hasina recalled the role of the government and the people of Tripura during the country’s War of Liberation in 1971 and said a new export item of LPG would be added to our export basket as there would be a value addition after importing LPG on bulk basis.

Criticizing those who are now vocal against the decision to export LPG to India, she said it was BNP which grabbed power in 2001 giving an undertaking of selling gas.

“At that time I said I could not sell gas without knowing the real reserve of gas … That’s why I couldn’t assume office through the 2001 election,” she said.