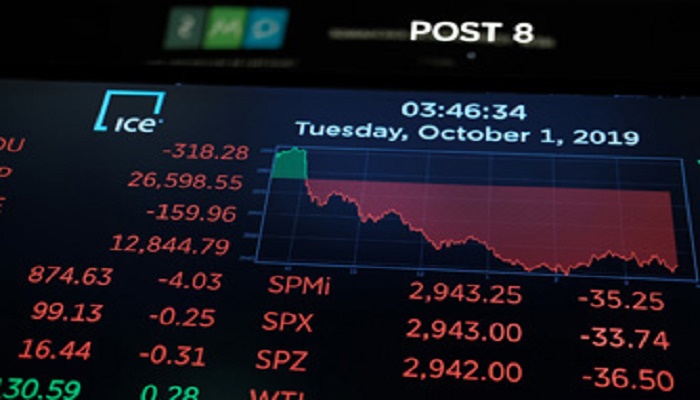 Stock markets on both sides of the Atlantic took a steep downward turn on Tuesday after a US survey pointed to the weakest manufacturing sector in a decade.

Combined with a tepid inflation reading from the eurozone, and confirmation that British GDP contracted in the second quarter, the figures rekindled fears over worldwide growth.

An index of US manufacturing activity fell to the lowest level since June 2009, according to the Institute for Supply Management, which pointed to trade conflicts as the biggest headwind, reports AFP.

“Global trade remains the most significant issue, as demonstrated by the contraction in new export orders that began in July 2019,” Timothy Fiore, chair of ISM’s manufacturing survey, said in a statement. “Overall, sentiment this month remains cautious regarding near-term growth.”

The report came as the World Trade Organization on Tuesday cut its 2019 trade growth forecast to 1.2 percent, warning of an economic hit from tensions over international commerce.

“Trade conflicts heighten uncertainty, which is leading some businesses to delay the productivity-enhancing investments that are essential to raising living standards,” Azevedo said.

And he cautioned that job creation could also be threatened “as firms employ fewer workers to produce goods and services for export.”

Eurozone stocks, which had spent most of the session calmly tweaking portfolios at the start of the final quarter, suffered an abrupt fall to end the day.

Wall Street, which had opened higher, fell quickly into the red and stayed down the rest of the day. Major indices ended down more than one percent.