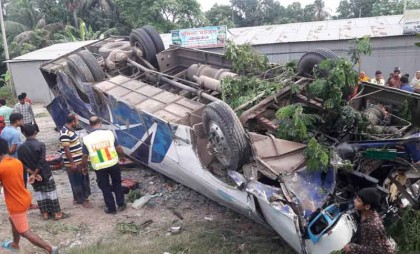 A pedestrian was killed and 40 others were injured as a speedy passenger bus overturned after hitting the man at Kalampur Bus Stand area of Dhak-Aricha highway of Dhamrai upazila in Dhakaon Tuesday morning.

The deceased was Jahangir Alam, 25, son of Kahinur Islam of Sadar upazila of the Manikganj district.

Dhaka-Aricha Highway Police Station (OC) Lutfar Rahman said: "The incident took place around 6 am when a Jashore-bound bus reached Kalampur bus stand area, the bus driver lost control over the steering and turned upside down. One dead on the spot and 40 others injured."

On information, members of Fire Service rushed to the spot and rescued the injured and immediately taken to the Dhamrai Upazila Health Complex.