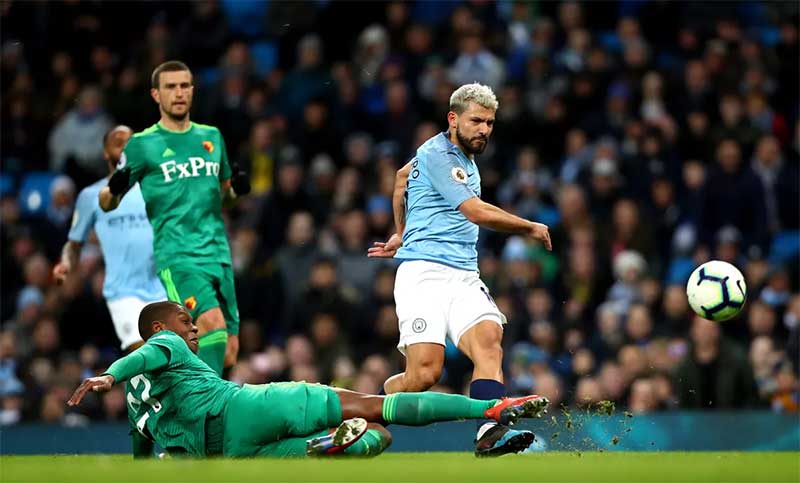 Bernardo Silva scored a hat-trick as rampant Manchester City swept to their biggest ever Premier League win with a sensational 8-0 mauling of Watford on Saturday.

Incredibly, it could have been far worse for hapless Watford as City - and Sergio Aguero in particular - passed up several chances to beat Manchester United's Premier League record score of 9-0.

Aguero at least had the consolation of claiming a Premier League record -- his early penalty means he has become the first player to score in the first six games of a season since the competition was launched in 1992.

David Silva, Riyad Mahrez, Nicolas Otamendi and Kevin De Bruyne all got on the scoresheet as City closed the gap on Liverpool to two points ahead of the leaders' trip to Chelsea on Sunday.

Given the recent history of this fixture, it was no real surprise that City won - or by such a big score.

After all, they had beaten the Hornets on the last 11 occasions they had met them in all competitions, including last season's FA Cup final at Wembley when City ran out 6-0 winners.

They have now scored a remarkable 46 goals in those 11 games - conceding just six.

But what was a surprise was the way the Hornets collapsed so quickly and meekly: they were 1-0 down after 53 seconds and five down after 18 minutes - the fastest that any team had gone five up in Premier League history.

Watford had only just kicked off when City mounted a move down the right flank which resulted in De Bruyne providing one of his trademark crosses for David Silva to slide in the fastest goal in the Premier League this season.

From that moment on it was one-way traffic. After three minutes Mahrez was brought down by Ben Foster and Aguero converted the penalty to claim his 100th home league goal for City.

Bernardo headed in from close range after Otamendi had headed down a De Bruyne cross in the 15th minute.

Otamendi was clearly keen to make amends for his nightmare in the shock defeat at Norwich because he slid home the fifth goal from Aguero's low cross after Watford had been caught napping by De Bruyne's quickly-taken free-kick.

It could and should have been more before the break with Aguero going close to completing his hat-trick.

Watford striker Dimitri Foulquier had a Premier League debut to forget, with only nine touches when he was withdrawn after 32 minutes.

With the game over by half-time, Pep Guardiola was afforded the luxury of making a change, sending on young left-back Angelino for Benjamin Mendy, who is easing his way back after a lengthy lay-off.

Later in the second half he also gave valuable run-outs to summer signing Joao Cancelo and 18-year-old centre-back Eric Garcia.

City went 6-0 up after 47 minutes with Bernardo adding his second poking a shot past Foster after good work by David Silva.

Bernardo looked almost embarrassed when he completed his hat-trick from a cross from De Bruyne.

He made a mess of his first attempt to convert from a few yards out but made no mistake with his second.

It could and should have been double figures. Aguero should have scored from the first of two superb crosses from Angelino, while from the second Mahrez planted a header against the crossbar.

After playing a part in so many of the goals, it was fitting that De Bruyne should score the eighth, and the best goal of the game, with a powerful shot from just inside the penalty area.

Moments later, De Bruyne should have made it nine - and equalled United's record score - but after weaving his way through Watford's defence he fired wide.