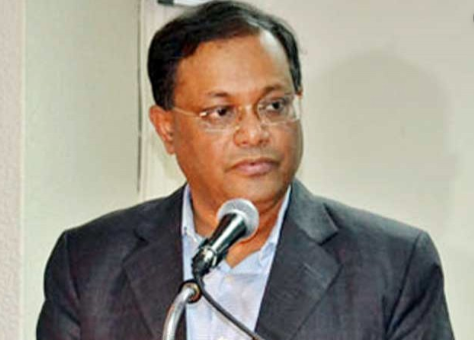 The information minister said corruption got an institutional shape during the regime of Begum Khaleda Zia. “Her son Tarique Rahman, a fugitive convict in different cases, including the August 21 grenade attack case, began the system of 10 percent commission. Bangladesh became champion in corruption for five times during Khaleda Zia’s regime,” he added.

Amar Prakashoni organized the discussion to unveil the covers of two books on Bangabandhu with former information secretary Sayed Margub Morshed in the chair.

Dr Hasan said the Awami League government is taking tough actions against any type of corruption as Bangabandhu’s daughter Prime Minister Sheikh Hasina has announced her firm resolve on zero tolerance against corruption. “The actions against the corrupt people will be continued and no one will be spared,” he added.

So, the minister said, the BNP leaders who brought shame for the nation and the country as well, have no ethical right to speak on this issue.

“I’m urging the BNP leaders to give thanks to the prime minister for her stance against corruption and seek apology to the people for their own corruption,” said Dr Hasan, also Awami League Publicity and Publication Secretary.

The minister said Bangladesh is moving ahead indomitably under the dynamic leadership of Prime Minister Sheikh Hasina. “The growth rate of GDP is the highest in the world which was 8.16 percent in the last fiscal year. The government is taking different plans to increase the rate in the current fiscal,” he added.