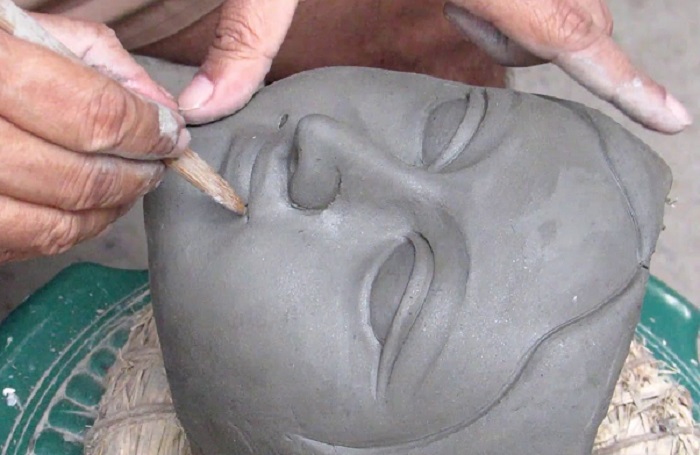 Preparations for Durga Puja are going on in full swing across the country with two and a half weeks left for the biggest religious festival of the Bangalee Hindu community.

The Mahalaya, the auspicious occasion heralding the advent of goddess Durga, will be celebrated on September 28. With the beginning of ‘Devipaksha’, Mahalaya is observed seven days before Durga Puja.

Idol makers and artisans are passing their busy days in making idols of Durga Puja at puja mandaps across the country. Generally, the idols are made diligently and methodically by the artisans to create exquisite pieces of artistry.

“All preparations for the Durga Puja are going on in full swing across the country,” Bangladesh Puja Udjapan Parishad General Secretary Nirmal Kumar Chattarjee told BSS on Monday.

He said around 32,000 permanent and temporary mandaps are being prepared for worshiping goddess Durga in the country, including around 240 in the capital city, this year.

Nirmal said the number of puja mandaps will increase this year compared to the previous year. Durga Puja was held in as many as 31,272 permanent and temporary mandaps in the country, including 234 in the capital, last year, he added.

The Puja Udjapan Parishad general secretary expressed his hope that the country’s Hindu community will celebrate Durga Puja with much enthusiasm and festivity.

He requested the Election Commission (EC) to change the date of Rangpur-3 by-election as October 5 is the second day of Dugra Puja.

Bangladesh Puja Udjapan Parishad also submitted a memorandum to the EC in this regard on September 12, he mentioned.

Durga Puja signifies the birth of Durga with the blessings of gods, as a collective energy, to fight the demon king Mahishasura.

Exquisitely crafted and decorated life-size clay idols of the Goddess Durga depicting her slaying the demon Mahishasura are set up in temples and Durga Puja pandals. These idols are then worshiped for five days and immersed in the river on the fifth day. The puja is performed in temples, homes and in the public, featuring temporary stage decorations.

The celebrations also include other major deities of Hinduism such as goddess Lakshmi (goddess of wealth, prosperity), Saraswati (goddess of knowledge and music), Ganesha (god of good beginnings) and Kartikeya (god of war).

Patwary said stern actions will be taken if any person or group spread propaganda on social media including Facebook to destroy communal harmony in society.

He urged the leaders of Puja Udjapan Parishad to deploy volunteers during making of idols, set up CC cameras and fire extinguishers and use metal detectors at puja mondaps.